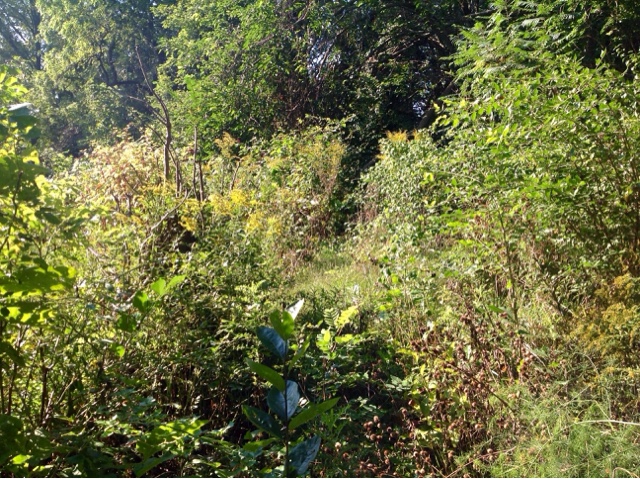 (A view of one of our forest gardens with high density. Looks like a natural system!)

What’s the correct density for a Food Forest Garden in the Great Lakes region? How close do you plant the trees? How should density change as the forest matures? We’ll look at a variety of perspectives on the topic and discuss how we can pick the right strategy for each garden and gardener to maximize productivity and minimize maintenance.
First of all, there’s no wrong way to forest garden. We humans seem to have a built-in ability to garden this way. It is, after all, one of the oldest human activities–something we evolved doing. That’s one of the great things about these gardens, they’re instinctive and nearly fool proof. In addition, these systems will evolve along with the gardeners and self-correct with time. Compared to the average American lawn, a forest garden’s practically always going to be lower maintenance than a pure stand of mown grass and it will pay you back in home-grown fresh food. Without a doubt, it’s the easiest way I’ve ever tried to garden.
In our forest garden projects, including the ones documented here at Lillie House, we studied a variety of perspectives on planting density, from traditional home gardens, experienced temperate forest gardeners, ecologists, and even conventional orcharding science and forest science. In all of these, planting density is probably the number one factor that will effect productivity, system health and maintenance.
In the temperate climates, our most productive ecosystems are savannas, forest edges and open woodland where enough light can penetrate the canopy to support flourishing productive layers underneath. Meanwhile, mature forests are less productive, but they are our most stable ecosystems.
So density acts as a sort of “dimmer switch” that slides the garden between ease of maintenance (closer to established forest density) and high productivity (lower density, savanna density) and it can be adjusted as the garden and gardener mature, depending on the needs of both. A great forest garden can take advantage of this by managing succession and planning for the flexibility to change density–and slide that dimmer switch, as the need arises, giving ease of maintenance when the gardener is busy and high productivity when desired. 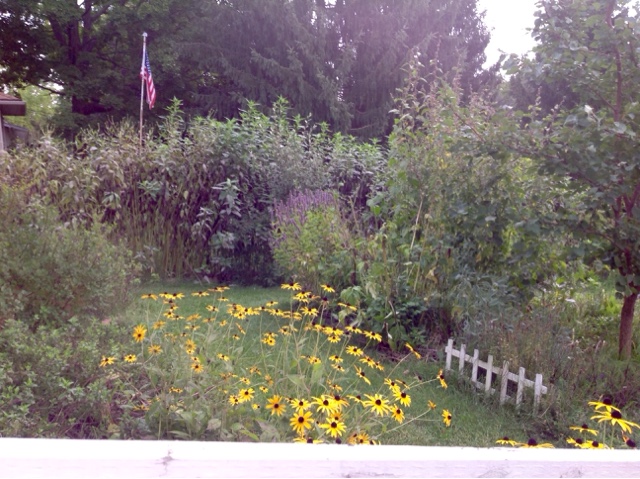 (Another one of our forest gardens, lower density, looks like a formal garden.)
This “dimmer switch” can be especially useful during the early phases of establishing a forest garden, when high planting density can fast-forward succession by mimicking forest ecology and cutting down on the high workload associated with starting any new garden.
So, in our forest gardens, we’ve used different planting strategies and densities depending on our goals and time limits. Lets take a look at a few of these different perspectives:
Robert Hart: The classic recommedation about planting a food forest comes from the man often considered the first modern forest gardener, Robert Hart. Robert’s recommendation was to select the species you want, starting with large overstory fruit and nut trees, and plant those at just over orchard density. So, this would be about 30 feet for many species. Next, he suggests selecting smaller understory fruit trees and planting those in the gaps, again at orchard density, or about 10 feet. Next he planted shrubs, again at orchard density, in the gaps between those… then filled in the rest of the spaces with herbs, ground covers and root crops. 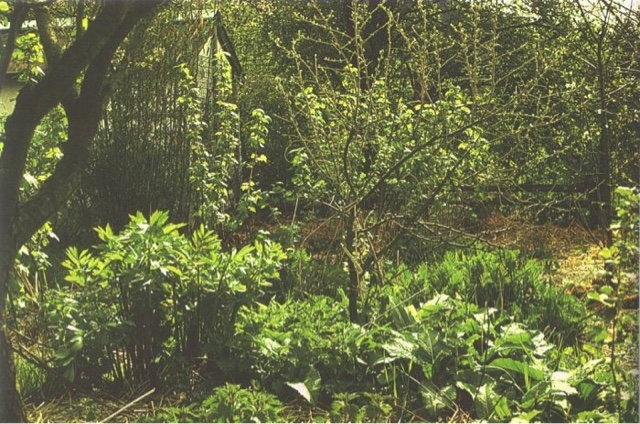 (Photo, wikimedia)
This is a true “food forest” with forest canopy coverage of 100% early on in succession and staying that way through maturity. At that point, these gardeners say their main maintenance task is yearly pruning to open up the canopy in order to increase productivity. Otherwise, these gardens quickly become self-weeding and mulching.
A few of the most famous and thriving temperate forest gardens were planted in this way, including the Jardin Des Fraternities Ouvrieres, Beltaine cottage, and Robert’s own garden.
Rober Hart describes his approach in his book “Forest Gardening.” 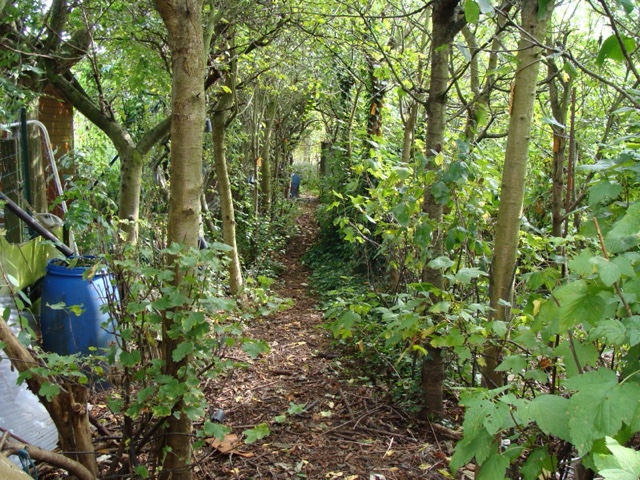 (A view of Les Jardins des Fraternities Ouvrieres)
Jacke and Toensmeier: many modern forest gardeners (Crawford, Toensmeier, Jacke, etc.) consider Robert Hart’s garden too dense at maturity for the temperate zone. (Edible Forest Gardens) While this spacing would be very productive in early years, the density and shading lead to reduced diversity and productivity as the canopy closes–if trees aren’t removed from the system over time.
Recognizing this problem, Jacke and Toensmeier recommended planting to achieve “open woodland” density at maturity, somewhere between a10-20% gap between tree canopies to canopies touching but not intermingling. This density allows for a greater diversity in the layers, right down to a ground cover and herbaceous layer. They also recommend heterogenous plantings, to maximize diversity, so no standard spacing or rows are used.
At his Holyoke Edible Forest Garden, Eric Toensmeier intensively planted his entire urban garden in finished guilds all at once after a large-scale sheet mulching, using these spacing recommendations. This created a stable system quickly, but required a huge effort up front to plan and execute. On just 1/10th of an acre, this approach is still manageable. 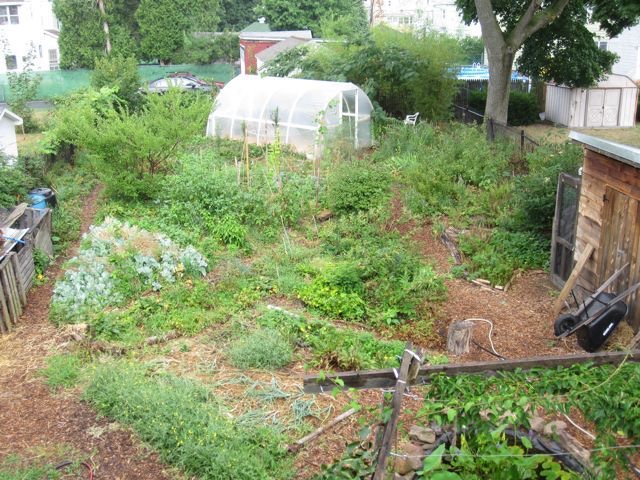 (Photo: http://www.foodforestfarm.com)
Martin Crawford used similar spacings in his famous forest garden, starting with planting all the trees at once and gradually filling in the understory by killing off small sections with black plastic mulch as the trees matured. This process is described in Martin Crawford’s books as well as in the Toensmeier/Jacke book “Edible Forest Gardens.” 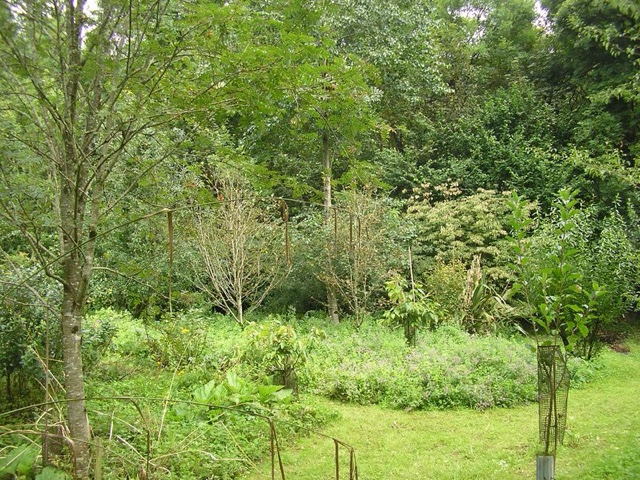 (http://www.agroforestry.co.uk)
Geoff Lawton: Geoff Lawton has probably established more food forest gardens than any other living person, and that kind of experience teaches some good lessons. Since he often installs gardens for other people, Geoff’s approach focusses on extensive establishment that quickly stablizes a system and leads to very low maintenance through high up-front planting densities. This insures his success, even after he leaves. In his warm temperate climate, Geoff recommends planting your target species–high value productive trees at approximately orchard spacing, then filling in the spaces with an incredibly high density rough diamond grid (to avoid rows which mimick a low-density forest edge) of up to 9 support trees for every target tree. These support trees are planned as “sacrificial” trees to be cut into mulch as the target trees mature and need more room. He plants a variety of fast growing “early succession” trees along side mid and late succession support trees to nurse the system into maturity. Using an orchard spacing large trees at 30 feet, with interplantings of small fruit trees, we end up with a planting density of around 2′. Using this kind of system, the trees quickly dominate the ground, out-compete weeds and establish a stable forest with great soils. This mimicks traditional hedge-row planting desnities in cold temperate Europe. 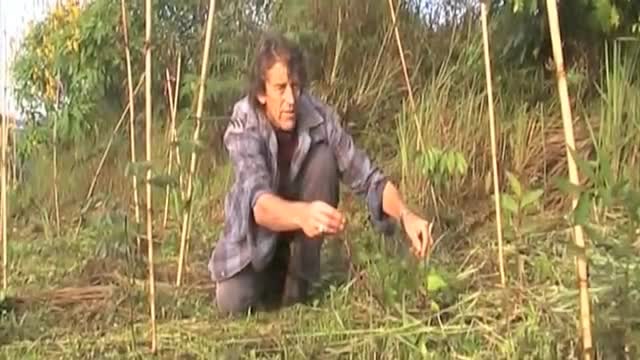 (Geoff with a new forest garden, each pole is a tree! http://www.pri.org)
Geoff Describes his approach in a series of videos available through PRI. http://permaculturenews.org/shop/dvd/food-forest-dvd/
Highly recommended!
Toby Hemmenway: Another approach that quickly establishes dominance is the “guilds that intersect” recommendation in Gaia’s Garden, specifically for home scale Permaculture. In this method, you plant trees at forest orchard density and simultaneously plant the lower (shrub and herbaceous) layers to create a complete, stable system all at once. In this way, you can convert an area to forest garden one tree guild at a time. While this system takes more energy, planning and investment up front, it simultaneously maximizes early productivity while minimizing maintenance.
And while we’re at it, here’s one more well-thought-out vote for high density techniques: 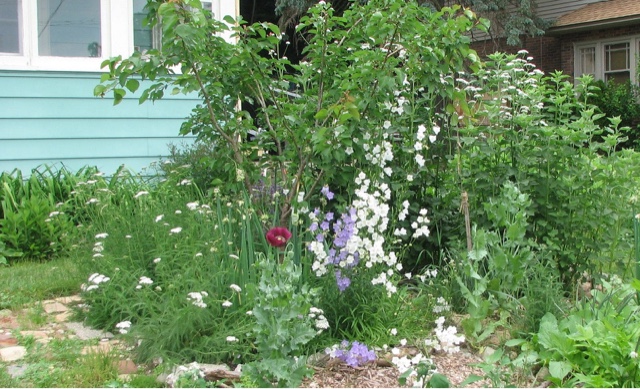 (A guild we planted at once, very low maintenance and high productivity!)
Mark Shepard’s STUN: Sheer Total Utter Neglect. The STUN approach is a both a low-density planting system and moderate maintenance, primarily recommended–as I understand it–for broadscale Permaculture alley cropping, intercropping or orcharding systems (moreso than for food forest gardens) where high plant loss, moderate maintenance and low early productivity is acceptable. It could also be considered a plant breeding program aiming to select species that thrive under poor circumstances. I’ve heard a few Permaculture fans experimenting with this approach for establishing forest gardens, but there doesn’t seem to be many examples to evaluate yet.
—————
To me, any of these techniques could be the best approach for a particular garden.
For example, in our front yard, our priority was ease of maintenance, since we needed to have a landscape appropriately tidy for the city. Since, we’d be doing extra maintenance anyway, we could also plan on high-productivity, so we put our money and effort into planting into complete guilds, one at a time before moving on to the next gild. Over time, these 9 guilds have intersected into one food forest system. Since we fast-forwarded succession by planting established guilds, this 3,000 SF of food forest probably only takes a few hours a month of non-harvest maintenance. It also provides a huge amount of food for such a young garden.
Meanwhile, with all that intensive effort going into our front yard, our back yard had to be much more “extesnsive.” so we planted at densities (often from seed, or by transplanting or encouraging weed trees.) closer to a Geoff Lawton system. Many of these trees have already received heavy pruning just 4 years into the system. While it took more time to set up, this forest garden takes more time annually to maintain at this point, even though it looks a bit “rougher.” It also provides less food at this point than our front yard.
Any garden I plan in the future will likely be a mix of these approaches (starting with at least one complete guild) to insure a good balance of productivity, maintenance and up-front investment.
In general, the two mistakes I usually make are too little density early on and too much density at maturity… meaning, I need to plan better for a garden that ages well.
————
And finally, lets look at some young natural forest systems in early establishment, to see how mother nature plants them in SW Michigan:

Young trees in a small system, on the south of a large tree. The small area means lots of light penetration, supporting very high densities that are self-mulching. 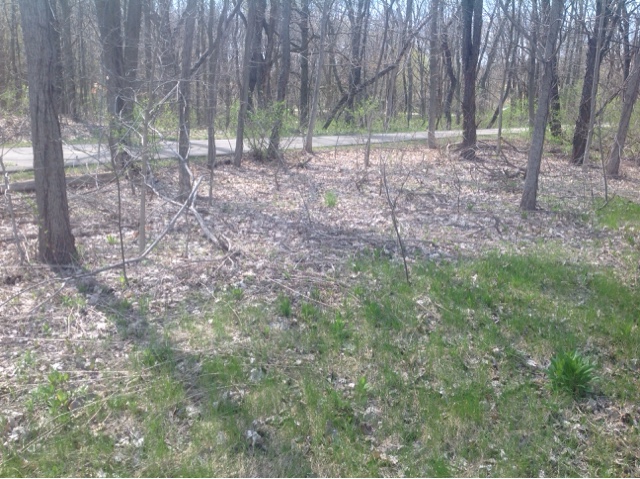 Another new forest of small trees on the edge of a more established forest. Again, the density makes it self-mulching and stable. Mix of cane fruit, bushes and small trees. 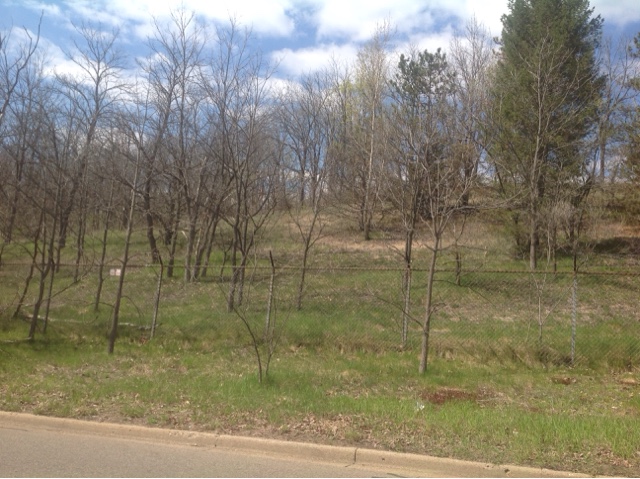 Density depends on soil and other factors. Here sandy soils on a steep slope have naturally less density. 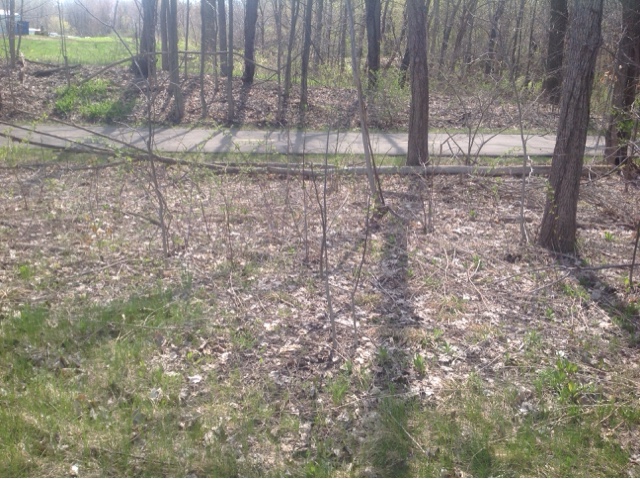 Self mulching densities, cane fruit, bushes, trees. The blackberries here are very productive, even at this tight spacing, providing both a nurse crop and an early succession yield. As the system ages, these will naturally get shaded out. 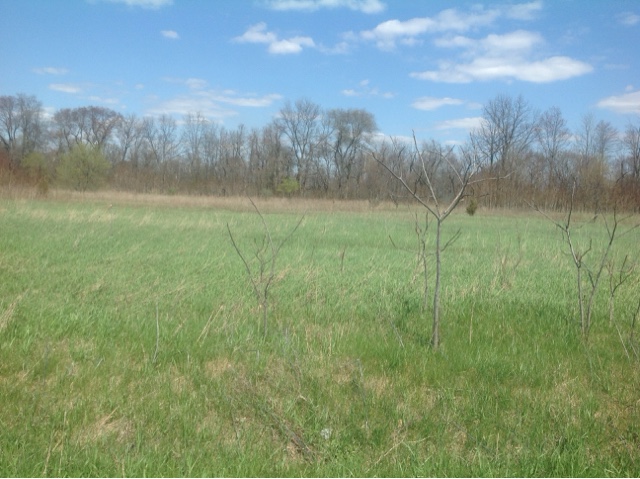 Hard to see… young trees convert a field on very sandy soil. Pioneer trees tend to group into thickets where they can out-compete grasses and become self-mulching quickly. Then these little natural guilds expand out, eventually connecting. As they build soil and defeat grass, they make way for mid-succession trees to establish.
These are the densities that nature will support here in SW Michigan, very similar to the densities Geoff Lawton plants in. You can plant at lower densities, but be ready for nature to fill all the niches you leave. which could either be a benefit (free plants!) or a huge maintenance problem (weed trees!) depending on your perspective.