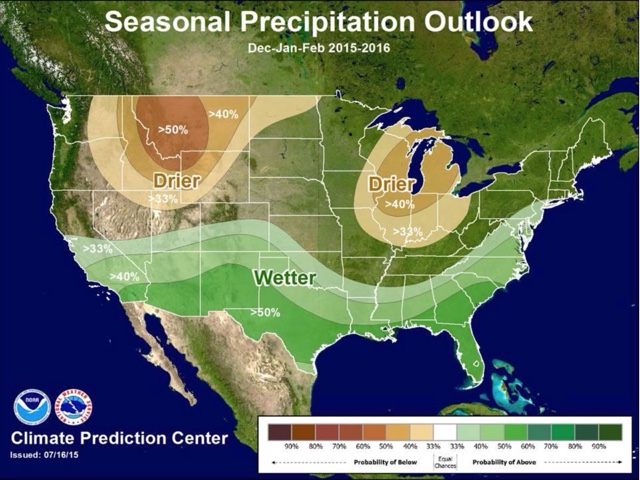 Last year was so wet, and so predictably so, that we didn’t even bother to put out our rain barrels. No need. Would have been a waste of time and energy. All our beds are designed to collect water, and we were getting at least an inch per week anyway. Other than “watering-in” seedlings, I never watered once all season.

Same thing the year before. Two good years in a row!
Spring 2016 will bring the return of our rain barrels. After looking at US and EU drought monitors, as well as a private service, all are predicting that we’ll fall somewhere between “drier than average” and severe drought for the Great Lakes region by August. Since I’ve only got about a half-hour to type this up, I don’t have time to link all my sources, so if you’re curious you can get online and search for “2016 drought predictions.” (Edited to add one article: http://www.agweb.com/article/pretty-severe-drought-possible-in-2016-naa-nate-birt/)
No need for panic, but with the possibity of dry weather looming, smart gardeners and Permaculture designers will plan to mitigate that risk and take advantage of potential opportunities for the season.
Be prepaired to take advantage of a possible early, warm, dry spring. Dry weather means we may be able to work soil, dig and plant earlier than usual, but that doesn’t mean we won’t necessarily get snow in April. So consider early plantings of frost-tolerant “spring mixes” of mustards, cold-tolerant lettuces, arugula, salad cress, shungiku, baby bok choi and other cabage relatives that can survive a week under snow cover should the need fall.
If you till for cold-season crops like oats or peas, this might be a good year to give them the early start (February-March) that they like.
If you’re looking to establish a Permaculture or forest garden season, it pays to plan well for dry weather.
The old-fashioned Permaculture advice of establishing a food forest by planting small, dense, manageable “guilds” of plants right close to your door or outside living areas would be a good approach this year. Try to get the ground completely shaded. I’d only plant as much as I knew I could water once a week, each week. And I’ll be mulching like crazy.
More distant plantings that are unlikely to receive weekly watering should focus exclusively on “early pioneer” species that do well in dry thin soils: Elderberry, Eleagnus, rugosa roses, hawthorn, hackberry, black cherry, locusts, mulberry, nanking cherry, sand cherry, and hazel. Planting black raspberry requires special maintenance considerations (they can be weedy in mid-succession before the trees and bushes fill in) but would ensure a fruit yield in the second and third year.  These plants together could make a good “pioneer guild” for starting a hedgerow or forest garden. Then, plant in some higher value species later. This is how we established our hedgerow in a droughty year, and I’m glad we did it that way. Paw paw is often listed by university extensions as drought tolerant, but keep in mind that they also require shade during establishment. Same with aronias and vibirnums.
For ground covers, consider a high percentage of drought tolerant mediterranean herbs, which have a stronger flavor in dry weather: lavender, oregano, thyme, sage, salvias.
Turkish rocket, Egyptian onions, chives, and asparagus are generally drought-tolerant perennial vegetables that could establish well in a dry year. Pay extra this year for larger asparagus crowns and send them back if they arrive dried out.
Squash are a good, drought-tolerant annual and I have a wacky theory that the leaf-shape evolved specifically to somehow create a moist, micro-climate underneath. If I want to show off my soil on a dry day, I go straight to a squash plant, lift a leaf and pull out some nice, rich, moist soil. It’s reliably some of the best soil in the garden. I’ve seen other gardeners do the same!
I consider a “STUN” (Sheer Total Uttern Neglect) approach (which has become quite fashionable) of large, linear plantings over large spaces (an acre or more) to be an important experiment (to be conducted with good documentation and A-B testing on site, of course!) but completely experimental none-the-less, rather than a “tried and true” recommendation. But this year (in my opinion) would be a bad year to try that experiment, unless you’ve got free plants or “farm grant” money you don’t mind wasting on a truck-load of dead trees.
Instead, look into the well researched “Miyawaki method,” developed and tested in temperate Japan then tested in many different climates. While developed to restore native forest, it has been widely adopted by Permaculturists outside the US (including Geoff Lawton) especially in tropical, dry and Mediteranean climates: extremely dense plantings in a diamond at least several rows thick. Collect stock from local wild populations (like rest stops and parks.) Prep the soil well. Mulch heavily.
If planting on a slope, use swales or “passive swales” made by piling organic debris like tree limbs on contour, on the uphill side of your tree planting. Take time to plant trees with “watering basins” around them to collect whatever rain water they get. You do this by creating little raised “dog dishes” of soil around the trees when you plant. Mulch, mulch, mulch.
It might also be a good year for rock gardens, alpine gardens, herb spirals, or prickly pear cactus.
Of course, the predictions could be wrong. It could be another wet, wild, slip’N’slide of a year like the last two. But I’m confident these are good recommendations in any year. We were spoiled by the last two seasons. Starting a garden project on a drought-tolerant foundation will ensure a resilent ecosystem that can stand the dry, when it inevitably does come.