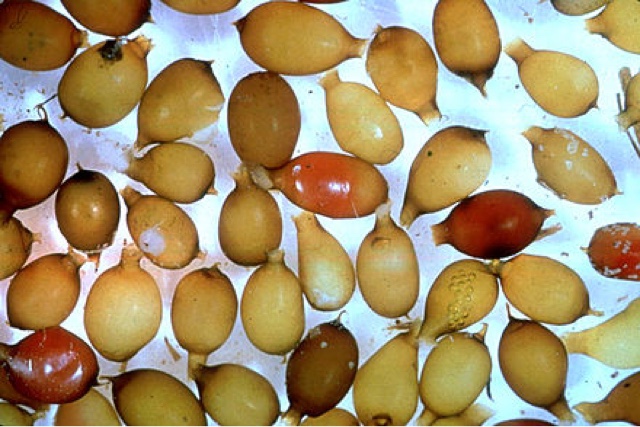 (These are the shocking “pest” that cause problems in native gardens. Recognize them?)

Last Spring, I went out to visit a large local “native prairie” planting around town and found landscapers there getting ready to till a large part of the garden. Just a few years eariler, this plot of land had been prepared for this native planting with a thorough regimen of multiple tillings and sprayings of herbicides to eliminate exotic weed pressures. Unfortunately, as is often the case, it wasn’t enough. A few non-natives still managed to survive and take hold. While the natives were slow to establish, these speedy weeds took over. Now, MAN had to re-exert his influence by beating back the “invaders.”
For those of us who love native plants and have tried to create “native gardens,” this is a familar story.
In fact, complaining about “invasive weeds” is probably the favorite pass time of native gardeners, and it’s certainly the #1 question I hear from environmentally-minded landscapers. We weed, water, and pamper them non-stop, but our native plants just don’t seem to do their part. It has become commonplace for native plant landscapers to use more tilling, chemical intervensions, and other non-natural techniques in native gardens than even the most intensive vegetable gardening operations. Even in their native environment, our “native plants” seem frail and poorly adapted to survive in competition with weeds that evolved in very different conditions in Eurasia and elsewhere.
No wonder we “nature lovers” turn into raging nature-cidal maniacs at the sight of “invasive plants.” It seems impossible to keep these brutes from man-handling (plant-handling?) our beloved home-team heroes.
So, what “in earth” is going on here? We hear all the time that our native plants should be “care free” and “adapted” to our growing conditions, so why do these exotic “weeds” so easily kick the good guys’ butts?
Here’s the shocking answer: We may have “native plants,” but we’re not planting them in the “native conditions” they evolved to thrive in.
Here are three ways we do our natives wrong, including the #1 most shocking reason that blew my mind when I learned about it.
—————————-
Problem 1: Non-Native Plant Communities.
For most of us home owners gardening on the small scale, our goal is simply to convert some of our flower gardens into habitat for native plants. This especially seems like a good idea since they’re supposed to require less maintenance than the exotics we’re used to. But, it turns out that “native flower gardens,” filled with species (selected for their beauty to human observers) just aren’t a naturally occurring ecosystem. Anywhere. Ever.
Go figure.
For example, in the Great Lakes region, like most of the Eastern Woodland East of the Mississippi, there weren’t even any large, stable areas of “native prairie,” the kind of ecosystem most imitated by Michigan’s native plant gardeners. 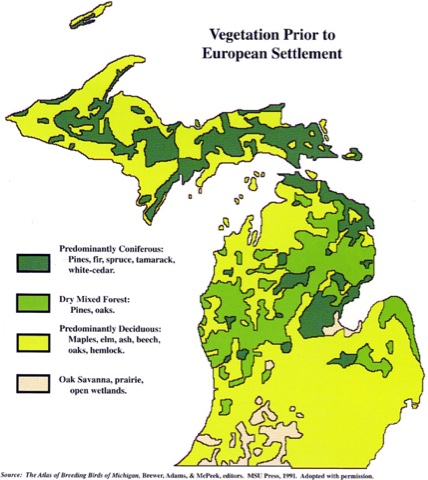 See that? No large swaths of “native flower gardens.” The dominant ecologies of “pre-settlement” Michigan were almost entirely treed landscapes, with small bits of temporary prairie.
Now, don’t get me wrong! I LOVE the “native prairie” gardens that are lovingly maintained around the city. They’re beautiful, artistic assemblages of native plants that aren’t easy to find or see growing naturally in the wild. But, where prairie systems occurred in the Great Lakes region, they were ephemeral, “disturbance ecologies” resulting from forest fires, storms or other openings in the forest ecologies. Which means, they were never meant to last.
That “native prairie” planting I started the article with? It’s trying its darndest to become a REAL native ecology: a forest. And the only thing that will ever stop it is more tilling, weeding, spraying, burning or other human intervention.
————————-
Problem 2: You Are Your Native Garden (Except, You Don’t Know It.)
When the first European settlers moved through the Eastern Woodland Region they described a startling landscape filled with a profusion of native wild flowers. It was common for these ecosystems to be compared to the most lovely flower gardens of old Europe.
So, maybe “native flower garden” really was a naturally occurring ecosystem of pre-settlement North America, after all?
Well, within a single decade of settlement observers began to note the complete disappearance of these wildflower ecosystems, replaced by a mosaic of tended grasslands, farms, and dense jungle thickets. That’s all it took, 10-15 years, and they were gone.
Even then, it was clear to many period writers and naturalists what had happened: we removed the “native gardeners” who used to tend these native flower gardens. For the most part, it was the interactions of native peoples that maintained these “anthropogenic” (man-made) systems by the wide-spread practice of burning. As a horticultural practice, this was an extremely low-energy way of maintaining the high food-quality of large parcels of land.
What it means is that those “native flower gardens” and “native prairie gardens” have always depended on human intervention (at least since the mass extinction of North American Megafauna, but that’s a story for another time….) Humans have always been the “keystone species” of these ecosystems, meaning we two-legged critters are fundamentally responsible for shaping and maintaining them.  Since it’s now impossible for us to carry out large-scale burning to maintain these gardens with low-energy systems, we must necessarily use more environmentally destructive, more energy-intensive means such as mowing, hand-weeding, tilling, spraying poisons and managed burns – if we’re indeed dead set on maintaining these “pure” native plantings.
But, even this is harder to do these days then in pre-settlement times, because of….
——————————
THE #1 MOST SHOCKING REASON FOR WEEDS IN NATIVE GARDENS:
Problem 3: Our Soil Isn’t Native Anymore. 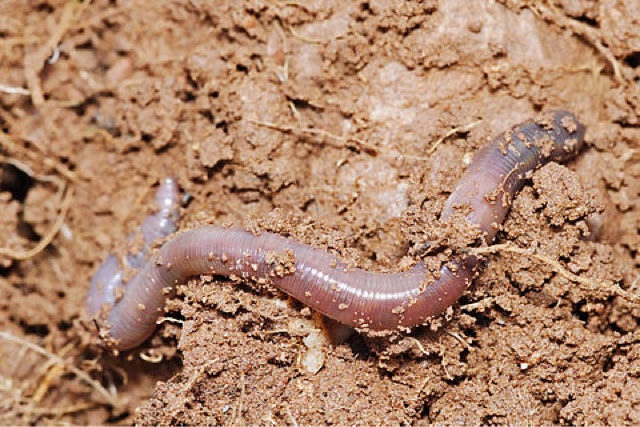 Exotic plants aren’t the only “invasives” in our native gardens. We also have to deal with exotic soil ecologies and the exotic soil organisms that make them up, for example, in the Great Lakes region, earth worms.
That’s right, in the Great Lakes region, north of Ohio, Indiana, and Pennsylvania, ALL earth worms are an “invasive species.”
Mic. Drop.
All earthworm species in our region were driven out by glaciation in the last ice age, just as St. Patrick drove the snakes out of Ireland. Well, except for they were worms instead of snakes. And St. Patrick was massive sheet of ice.
If you’re having trouble believing this, you’re not alone. I’ve had folks with advanced degrees in life  sciences argue fiercely that this couldn’t possibly be true, and that earth worms were GOOD for plants, which means they must be good for native plant gardens, too.
So, before we go any further:

A scholarly article on the topic:

3 thoughts on “The #1 Most Shocking Reason for Weeds in Native Gardens:”