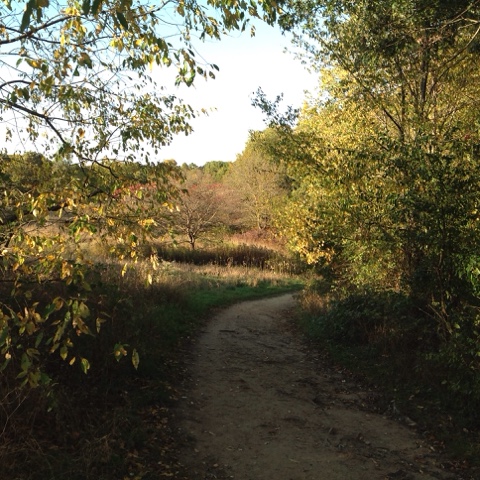 Utterly miraculous – that’s what it must have been for the first European settlers who delved into the heartland. Can you even imagine it? We’re only now begining to understand how densly populated by humans with rich cultures the Americas actually were, when these visitors dubbed what they found “a virgin continent,” an “untouched wilderness.”

A vast land with the beauty of the greatest old-country parks and gardens, a naturally growing cacophony of flowers in a broad, open understory where a wagon train could be easily driven straight through. Above, tall chestnuts, oaks, and maples built a cathedral as elegant and glorious as any engineered by the architects of Rome. A menagerie of deer, small mammals, and squab were abundant, strangely friendly, and easily hunted, and even the rivers were described as boiling with fish, lined with a thick carpet of clams. Food was abundant, and must have put the most productive yields of modern industrial agriculture to shame.
Understand, I’ve chosen my metaphors deliberately here, to share a tapestry of descriptions I’ve read in the awe-stricken accounts of primary sources:


“Nothing can equal the surpassing beauty of the rounded swells and the sunny hollows. The brilliant green of the grass, the numberless varieties and splendid hues of multitudes of flowers, I gazed in admiration too strong for words.”

And most magnificent of all were the savannas that were once common across the region where the Eastern Woodland receded into western prairie. Just as we call the prairies “grasslands,” these savannas were “flowerlands,” glorious with a great bounty of broadleaf plants that provide medicine, food and forage. These special ecosystems are the preferred environment of many species, the only place where some can thrive. No doubt it was also home to undiscovered, lost soil communities that we had not yet begun to understand when we brought with us a vast, yet tiny army of invisible conquistadors to colonize the kingdom under foot.
Within ten years of “settlement” by Europeans, these ecosystems were transformed. The open woodlands filled in to thick forest, prairies and savannas turned to cane thickets and old field, and eventually forest. This once open, park-like continent transformed to just another dense European thicket, and the North American miracle was never to be seen again.
——————
If it pains you to know what we’ve forsaken, take heart. If we can understand and appreciate what we’ve lost, there is the possibility that we can find it once again.
And now, a growing community has gone looking to save and restore some of these lost wonders, including the savannas.
——————
Last week I went to a talk by Mitch Lettow of the Land Conservancy of S.W. Michigan on “conservation” approaches to studying and restoring savanna. Mitch has been working with MSU and the Land Conservancy on restoring some small vestiges of old, pre-colonial Michigan. What’s interesting to me is the approach, they’re essentially trying to turn back time. They’re looking at how these open savannas quickly filled in with saplings and brush, removing this growth and revealing the savanna hidden beneath.
Researchers like Mitch are starting to research is examining the soil seed bed. What they’ve found is that at least in some cases, the native seed stock is still there. The ghosts of the old savannas still haunt the soil, tend their future generations, and when we make room, the old ecologies can return. The DNA of the past is still there in the soil, waiting for us….
This research supplies an important element in reclaiming Savannas.
Another key to hope lies in the emerging partnership between researchers and Permaculturists applying that research to reclaim “agricultural land.”
But rather than merely reclaim the past, these farmers, such as Permaculture teacher and author Mark Shepard, have been working to create a place for savannas in the future. Under a paradigm called “regenerative agriculture,” they’re modeling productive farmland off of native savannas, and returning the promise of their lost abundant bounty to the land.
Permaculture brings two key insights to this work conserving the savannas. The first is that it was the “invisible hand” of economics that swept the savannas off the table. We need to make humans value this ecosystem if we’re going to preserve it, and the best way to do that is to figure out how to make them profitable. We can get that invisible hand to do some good in the world for a change.
But the second, more important insight is an application and understanding of deep ecology to this landscape. To say that a savanna is “20-40% canopy cover with some forbes,” for example, is like saying a human is “a few square feet of epidermis draped over some other junk.” Each savanna is its own self-organizing system, its own distinct quality emergent from the complex interaction of all the beings it holds within. But among that broad ecological community of equals, there are some pillars of the savanna ecotype which most give it soul: the large herbivores, the passenger pigeon and mankind. 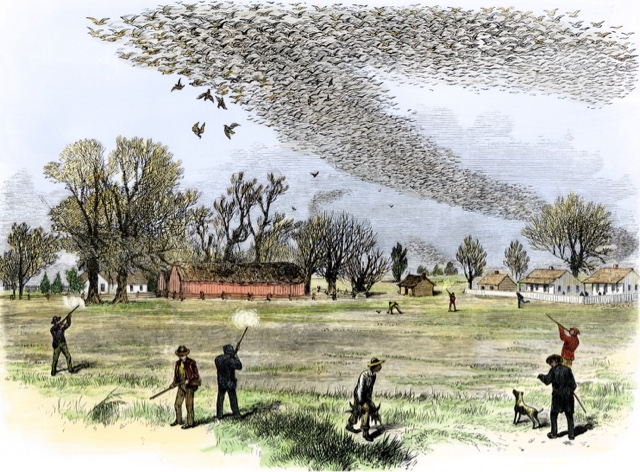 (Passenger pigeons over the savannas of Louisiana, 1870)
Each of these species were a special, central part of the savanna ecosystem. The passenger pigeon once numbered in the billions. Clouds of them would blacken the sky for hours or even days as they passed. It would be arrogant in the extreme to suspect that we could ever tease out all the complex interactions they would bring as they stopped to perch at a stand of oaks. Some have suggested their droppings could alter the soil ecology, its acidity, and certainly its microbial community. Others have posited that the fermenting of their scat would contribute a natural fuel to the fires that formed gave the savannas their open understory. But the unthinkable did indeed happen and the passenger pigeon went extinct. Next is the American Bison, which once made it’s home across the savannas. Again, these beasts roamed in large numbers, fertilizing and enriching the soil, and browsing away young tree seedlings before they had the chance to fill in to a thicket. Like the other large megafauna before them, the mammoths and ground sloths, etc. their role in shaping and maintaining savannas must have been profound. 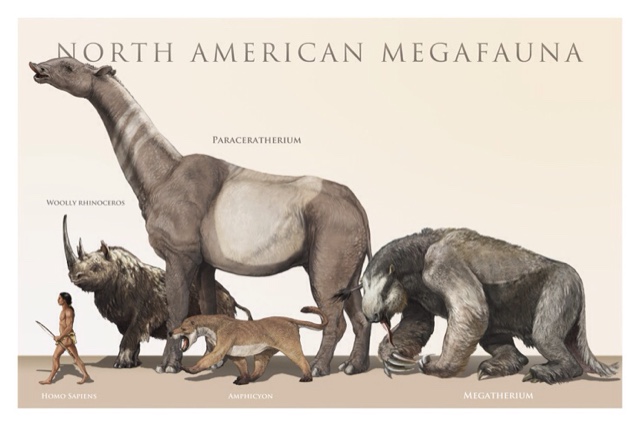 (Wonders roamed the Pleistocene, 10,000 years ago as the savannas took shape.)
Then there was man. Our patterns of hunting, gathering alone must have been profound. But then came the fire. As we commonly understand now, Native Americans made extensive use of fire to shape and preserve the savannas, this most important ecosystem for meeting their needs. It was this one act, the fire, more than anything else, that was the heart of the savanna ecosystem. 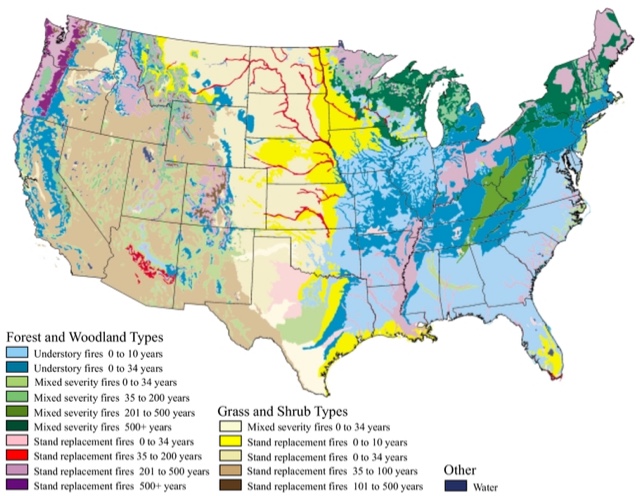 If we want to maintain the soul of the savannas, and not just some semblance of their external aesthetic, we must replace these key interactions. In the past, our approach has been to replace them with 4 new “keystone species:”
– The chainsaw
– The backhoe
– Herbicides
– And the flamethrower (or, less poetically, incendiary devices.)
But now, Permaculture is providing a better way, creating models that restore the natural relationships that form and maintain savannas as self-organizing systems. Permaculture is returning the soul. In the Permaculture model, the keystones become:
– Large herbivores: These systems create high quality land for grazing cattle, fattening hogs and hunting wild herbivores like deer.
– Chestnuts: Hybrid chestnuts and emerging disease-resistant chestnuts are often featured keystones of these Permaculture ecologies.
– Ground birds: Many of these systems feature a wide variety of fowl, including ducks, geese, chickens, turkeys, etc. These begin to replace some amount of the lost interactions of the passenger pigeon.
– Humans. Finally, we reclaim our place in nature, as kind stewards enriching the environment for all, instead of destructively harvesting it for our short-term gain.
– A light touch. Perhaps the key component in the emergence of a new, self-sustaining savanna system is for humans to step back in our management. Intensive intervention will only create man-made systems shaped by oil energy.
And each of us can play our part, joining in becoming our highest selves and demonstrating the true purpose of mankind in the natural world.
Well first of all, we can support the farmers who are leading this work, such as Josh Schultz of Cedar Creek Permaculture and Clay Smith of Earthsmith Farm here in S.W. Michigan.
Start growing more food at home. As we embrace the “grow your own” movement, we’ll make more room for the savannas and for farmers who want to act as stewards to preserve them.

And support the work of organizations like the South West Michigan Land Conservancy.

Just as those ghosts of the past, the seeds of the soil, remain in waiting for us to simply make room for them to return, I believe there is something waiting in our souls, wild, kind, and free, that will return when we make room in our hearts for the savannas. 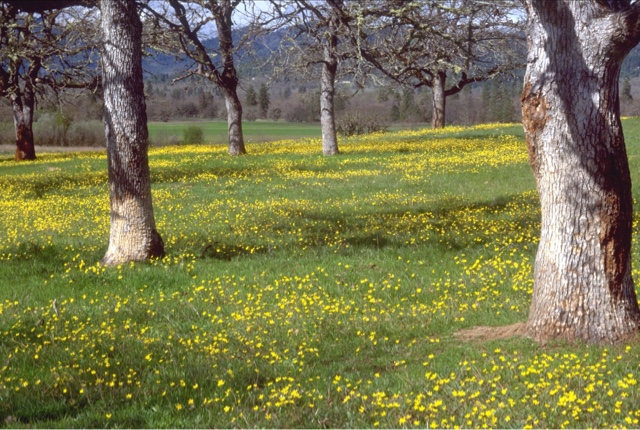 2 thoughts on “How We Save the Savannas”