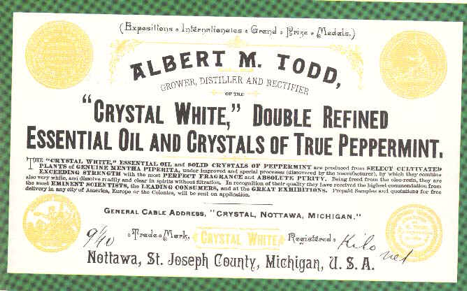 (Our neighbors – Lillie House is nearby the A.M. Todd Mint flavoring facility in Kalamazoo, and we sometimes enjoy the aroma of “stepping into a York peppermint patty” from our garden.)
Did you know that 90% of the world’s mint used to come from a small area around Kalamazoo?
That’s right! We were once the mint capital of the world! Farmers here used to grow mint right out in the ground like maniacs, first in burr oak openings and later as an alternating perennial crop in farm fields, especially in our Kalamazoo mucky soils, often in the same fields as our famous celery (Kalamazoo was also famously once the celery capital of the world, and is still sometimes called “Celery City.”)
But wait – how could we possibly have grown anything BUT mint, I mean, once that “ultra-invasive rampant jerk of a plant” mint got established?! 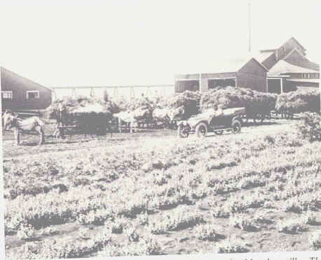 (MSU – A mint field in early stage of estblishing root cuttings.)
That’s right, I’m on about “weeds” and “invasives” again, one of my favorite topics. Listening to the quivering fear in people’s voices as they talk about the dangers of The Herb That Shall Not Be Named, or the stern disapproval of gardeners who say it is simpy “wrong” to plant any mints in any garden – EVER – I’m left wondering how we managed to grow celery or anything else ever since around here, if we had this “impossible-to-get-rid-of” bully of an invader growing in all the fields all around us.
What’s even stranger is that as an avid forager and hiker who’s spent the last 5 years trucking through the region’s thickets, old fields, deep woods, open trails, and every other possible ecology – including old mint fields – I’ve never once seen this “invasive” growing as an escapee in our region in the wild! If the conventional wisdom I often hear about this plant were even half true, then how could this possibly be?! 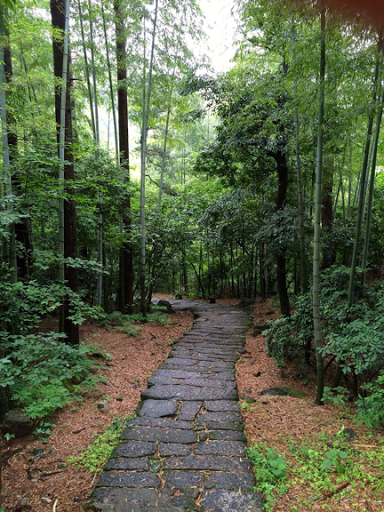 We’ll get back to mint in a minute, but first: Have you ever noticed that in Asia, there are plants other than bamboo? Again, considering the utter scornful condemnation of any gardener who’d dare to plant any bamboo in their Michigan garden, I’m left wondering how any other plants manage to exist anywhere in asia. In fact, as pointed out by Toby Hemenway in Gaia’s Garden, people in many folk or indigenous communties in Asia would be surprised to hear that there’s anything wrong with the plant at all…. The same goes for other “Verboten” plants in their home regions, where they’re arguably most adapted to thrive: culinary mints, oregano and thyme in the Mediterranean region, sumac, poke and brambles in North America, garlic mustard in the British Isles, and so on.

Now, before a gaggle of gardeners hunt me down and force me to wear the scarlet “W,” let me emphasize that caution is called for. While I’m the kind of guy who plants mints as part of a rotation in my garden beds, I’m also quick to caution people against planting specimens (like seedling hardy kiwi and vinca minor) that could become a management nuisance, could escape into nearby woods, or get them in trouble with their neighbors. And when I create landscapes for clients, I always assess how much time they have and how much they will be able to spend gardening and I never plant anything that I think could get out of their control.  I do NOT adise most people to plant mint or bamboo in their gardens without a thick soil barrier preventing their spread.

But the point I’m trying to make is about our mindset on “weeds” and “invasives,” which isn’t really helpful to gardeners or to the supposedly “wild” ecosystems we often spray into oblivion in a tissy over “weeds.”

There are of course plants that were imported to North America that really did become widespread, to the detriment of native ecologies and plants. The most obvious cases are the non-native grasses we use in our lawns, and the dandelions that go with them. And in this case, it is now commonly believed that is the change in land management systems (from grazing and burning to mowing) that is responsible for the domination of non-native grasses – in other words, the plant spreading wasn’t the problem, Europeans spreading was. But most often, like mint, these plants have more bark than bite.

In this fascinating MSU article on historic mint farms in S.W. Michigan  they discuss the need to either replant the field every few years, alternate crops or let the field fallow, because every few years the populations would decline. Culinary mint plants are cultivated by root cuttings, are largely sterile and rarely set seed, so when a plant spreads in your garden it is all the same plant, with the same root system, and – such is life – everything eventually gets sick and declines, everything dies. Even mint. 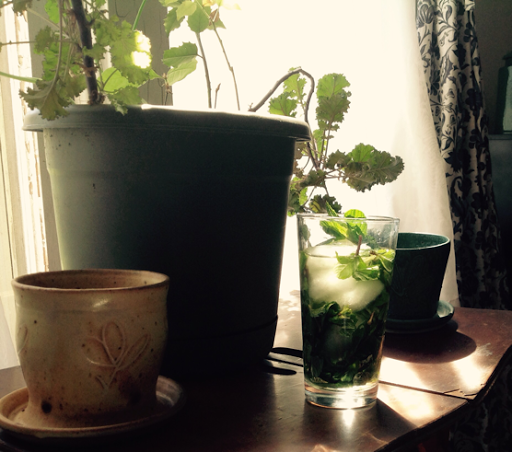 (My standard summer beverage, mint water with a splash of orange bitters.)
Like any other biological organism on this planet, mint, bamboo, and probably most other plants fingered as “invaders” all have their evolved niche, their roles in the process of “ecological succession,” the process whereby nature transforms lawn gradually into an old growth forest. Each species may have its day as king, but it will be replaced as other tougher plants move in and the system naturally grows towards its “climax” as a mature forest, with greater diversity. Then, even the dominant climax ecology, the forest, is no longer deemed permanent, but just another ephemeral community, taking its time in the light until lightning, fire, humans or some other “disturbance” inevitably removes the woods and restarts the process of succession. This gives us an opportunity to solve weed problems by working with this natural process. We can “weed” our garden with our minds.
So it seems to me that the problem very often is not with the plants, but in our thinking and interactions with them. The problem isn’t in our gardens, but in our heads, where the thought of a single plant getting “out of place” is an affront to our sense of control. Change is painful. We want our gardens to be “perfect,” locked in time, never growing or changing, or getting old. But nature wants the system to mature….
One of the most rewarding things I’ve learned from Permaculture is to let go of that control, and hand over the steering wheel to mother nature. She knows where she wants to go (ecological succession, greater diversity, more energy) but she’s quite happy to take suggestions about how to get there (like which species to include, how much to “produce”) so long as we’re moving in her direction. What I’ve come to recognize is that often, my preconceived ideas about what’s productive or aesthetic (like what “belongs” in a garden, or what’s “native”) don’t really serve me or the ecosystem. And it feels particularly awe-inspiring to sit as just another individual co-creator in a dynamic evolving space that is “our garden,” instead of a strange, sterile incarnation of my own neurosis imposed on the landscape. And it feels nice to look around my garden and see beautiful, helpful plants, each filling exactly the niche it evolved to fill, and doing exactly the job that I should expect it to, instead of seeing hated invaders and enemies.
If you’re looking to recover from your own weed-neurosis, here are a few Lillie House articles that might help you learn to seek a functional balance with your weeds, a perspective that I’ve learned from studying Permaculture and ecology.