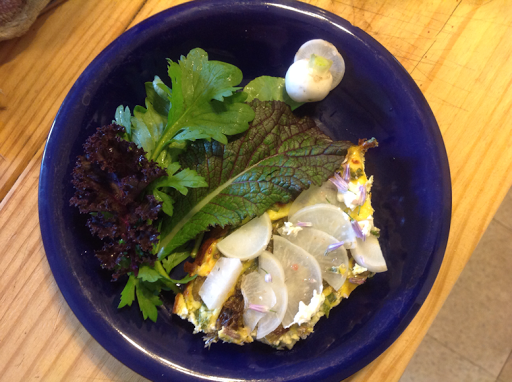 These French Breakfast radishes are manna from heaven – a tender, buttery texture and a mild, creamy flavor, they’re the only radishes I bother to grow. I usually eat them simply, sliced thin on open-faced french bread sandwiches, layed neatly on a thick layer of high-quality cultured butter and sprinkled with slightly crunch coarse Himalayan pink sea salt. A simple meal fit for kings – profoundly complex yet subtle flavors made this one of the classic sandwiches of all time for a very good reason. But the magic is in the interactions between the exact ingredients. A nice french bread with a biscuity aroma, the mild creamy, butteryness of the French breakfast radishes, and the texture and flavor of a traditional European style cultured and salted butter. Even the subtle acridity and crunch texture of the salt is part of the alchemy that gives this sandwich its emergent property, something better than the sum of its parts. 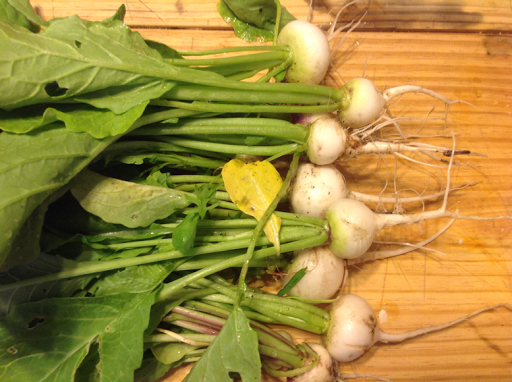 The tradeoff is that 2 days of 85 degree weather and the whole lot are bolting.
So if you too have radishes to put to use, or seeing a glut of them at the market as the temperatures rise, you can try the classic radish sandwich, or this quiche inspired by the same flavor combination. In this case, made with a potato crust, as I’m always digging the season’s last over-wintering potatoes around the same time radishes bolt and asparagus are at their peak. Chive flowers add a touch of pink to coordinate with the sea salt and slight pink of the breakfast radishes. Unfortunately, both of these recipes are very dependent upon the specific undertones of the exact ingredients, and would likely be a little lacking with any substitutions. 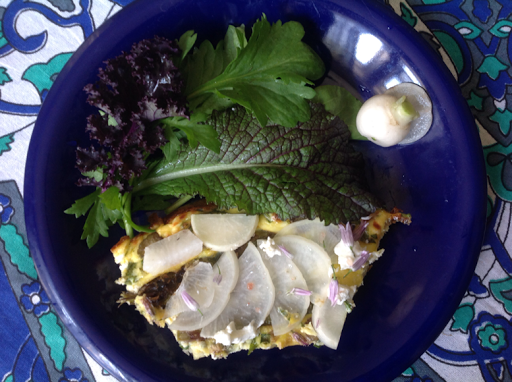 Asparagus and French Breafast Radish Quiche with Chives
Tools:
sharp knife for thin-sliced radishes
medium cast iron pan
Ingredients
3 small potatoes.
1 bundle of whole chives, including bulbs and a few flowers.
1 bundle of small-sized French Breakfast radishes.
6 eggs
1 cup cream or whole milk, or 1/2 cup lowfat milk and 1/2 cup creamy goat cheese (FTW.)
3 large stalks of asparagus, sliced or 6 small stalks of asparagus.
Himalayan pink sea salt, coarse.
1- 2 T olive oil.
Directions:
Heat the oven to 350.
Thin slice the potatoes as though making thin american fries or potato chips. Coat the bottom of a cast iron pan with a good quality cooking olive oil and brink it just to the point of smoking, over medium-high heat. When it just starts to smoke, add the potatoes and turn down the heat to medium. Olive oil has a low smoking point and keeps the oil at just the right temp to end with a somewhat crispy potato crust.
Slice the chives, separating the white bulbs from the green stems. Set aside the flowers for later. Next, prep your asparagus. Brown the potatoes fror about 5 minutes, then flip, adding chive bulbs.
Sautee the asparagus in a separate pan with a cooking oil or butter until tender crisp. Meanwhile, whip your eggs, cream and chive greens in a bowl together. When the asparagus is ready, add on top of the potatoes and poor the egg mixture over top. Put into the oven and set timer for 15 minutes.
Next, slice the radishes about 1/8th inch thin. You’ll want enough to almost completely cover the top of the quiche. 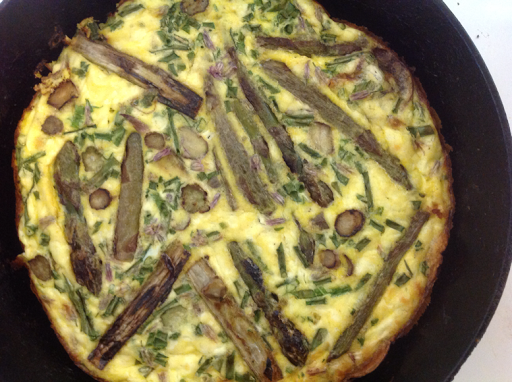 (Yes, this is a lovely dish all by itself.)
When the timer goes off check the quiche. It may take another 10 – 15 minutes, but it’s important not to burn egg dishes, which turns them tough. It should be “puffed” all the way to the center and starting to brown around the edges. A quiche will set some after it’s done cooking, but if it isn’t risen all the way to the center, it will likely not completely set. 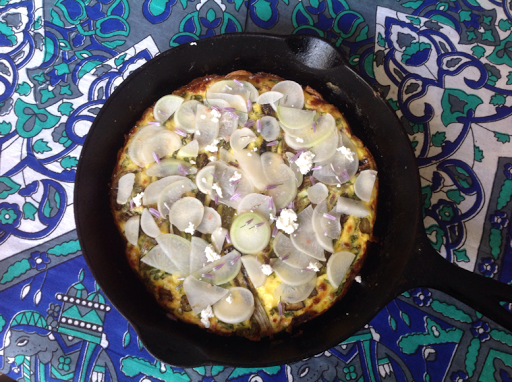 When done, remove from the oven. Immediately add radishes. This should heat them through enough to slightly soften them and turn them transluscent, but without ruining the raw flavors and texture. Allow to cool another 10 minutes. Sprinkle the top with sea salt and chive flowers. Serve with a bed of spring microgreens. 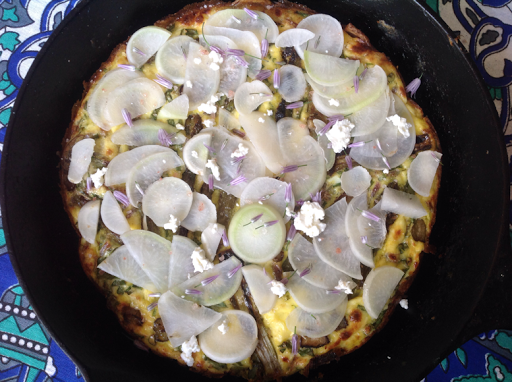 One thought on “Asparagus and Radish Quiche with Chives”