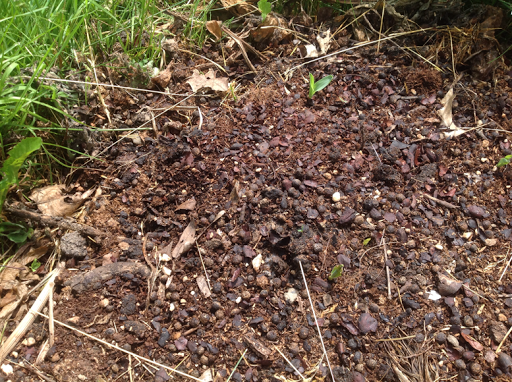 (Corn germinating in piles of mulch plopped directly on top of slashed meadow, with no barrier. Most of the mulch material was taken from our nearby hedgerow, which also acts as a fertility belt, mostly slashed comfrey, sorrel, chicory and autumn olive. This was covered with a layer of “brown” plant material like dry jerusalem artichoke stalks. A thin “finish mulch” of compost, cocoa mulch, and coir was used to create a seed bed for germination. )

As a quick update, we’ve overcome the first hurdle in our No-till Slash Mulch 3 Sisters planting. We had nearly 100% germination by day 5, with a few stragglers bringing close to probably 98% germination, much better than the 75% average expected in conventional corn plantings. All germination happened within the expected average 5-7 days for corn. 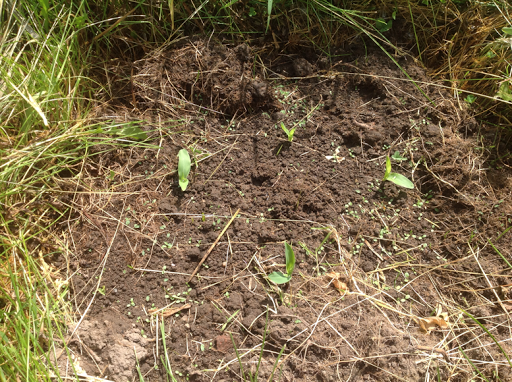 (Here we turned over the sod to reveal a seed bed, and used the up-turned sod to make slight watering basins. An inch of compost was mixed with the soil.)
There was no measurable difference between our “dug” circles and our mulch piles in terms of germination time or percentage, growth appears even between both sets, though one mound MAY show some small signs of excess nitrogen “burn” in one or two seedlings. This is very encouraging, because it was not a given that in such an experimental style of planting that we would have good germination. 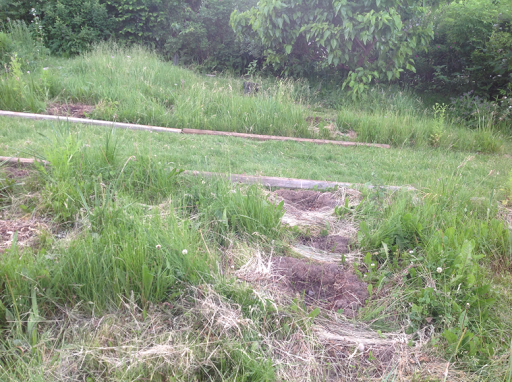 Our next step will begin to “slash mulch” more of the existing vegetation to provide good mulch for the growing corn and squash, much in the same way that we (and other Peramculturists) do in our other no-dig garden beds. This will NOT completely remove competition, leaving the “weeds” other edible plants and grasses largely in tact, but instead just give our three sisters a “leg up” on the competition. In a few South American studies, similar slash mulch techiques have been found to outcompete organic corn production by 4 times, and even out-yield conventional chemical agriculture. However, I could not find any temperate-climate studies (or at least North American ones, there was one high-yielding study on traditional slash mulch in temperate Nepal) on slash-mulch production, so we’ll have to see how our planting does. 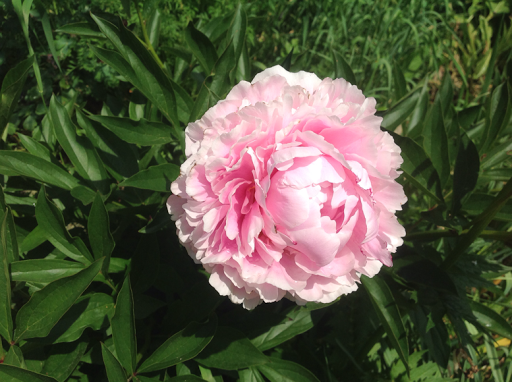 In the meantime, with this important hurdle cleared, I feel I can recommend others who might want to also try this technique, and have extra seed to play with. While I can’t yet guarantee an outcome, because this technique took so little time to prep and plant, I can assure you that you can significantly increase your 3-sisters planting area relative to the amount of time you have to garden.
———————————–
And stay tuned for more unusual adventures in Permaculture, home restoration and homesteading, where we will answer the questions:
What’s the relationship between Permaculture and Science?
How about Permaculture and Preppers?
What is limewash, and is it sustainable?
And: What makes the best mulch for a Permaculture garden?
Coming soon…. 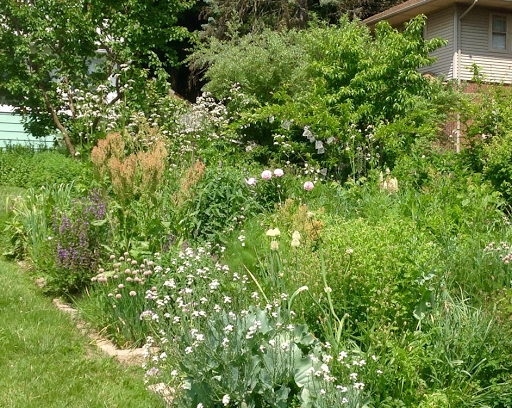