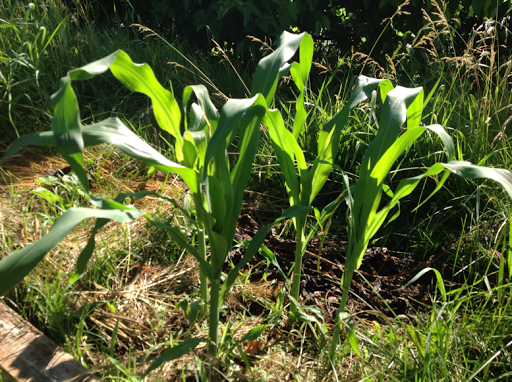 (For those placing bets on this project and whether or not it will work, this is update #3 in what will become a series on “slash-mulch” 3-sisters gardens using a no-till, minimum [or no] dig techniques.)

Many researchers have identified “slash-mulch” gardening systems as the most sustainable form of annual gardening ever divised by homo sapiens. This traditional technique, found around the world, does not till the soil, which releases carbon into the atmosphere, requires heavy labor or fossil fuels, causes a loss of soil nitrogen, and an extreme loss of biodiversity and soil life. In fact, slash-mulch systems, which cut vegetation and use it as mulch in place, tend to increase the diversity, health and fertility of the fields they’re used in. This same technique has even been found to increase the biodiversity and prevalence of broadleaf plants in meadow systems, fast-forwarding succession and reducing the dominance of grasses. 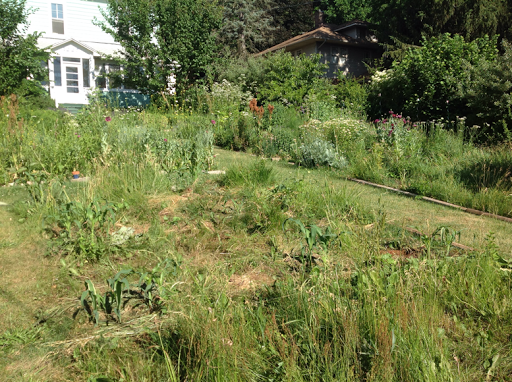 So it’s a perfect system to try in our “edible meadow,” where we’re trying to gradually convert lawn into productive flexible garden area without EVER digging, tilling, spraying or otherwise de-foliating the area.
It is also widely believed to be the way Native Americans grew their famous 3-sisters gardens of corn, beans and squash, though I’m aware of no other experiments trying to replicate this technology. 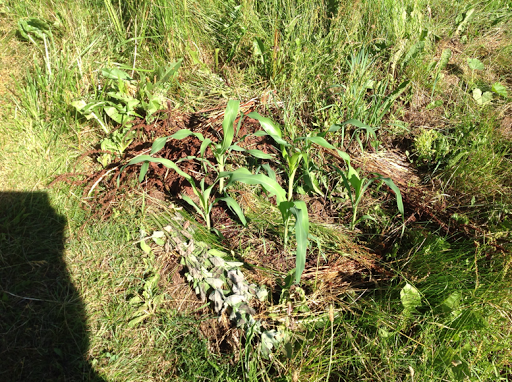 If we get it right, the implications for homesteaders and market gardeners are HUGE: we can convert large areas of lawn or field into perennial productivity without ever tilling, while at the same time sustainably growing these important crops – with minimal time investment and almost no off-site materials or fertility.
GROWTH. So, with good germination achieved, the next major test is on growth! And so far, so good: we appear to be ahead of schedule, already reaching “knee high by July,” with most of our plants passing this height in mid June. We do have some stragglers, but nothing conclusive as regards prepping method. One of our straggler mounnds was minimally dug, and two were sown into mulch piles. So far, it appears that an excess of green material without enough “browns” is the common factor in the slow mulch mounds. 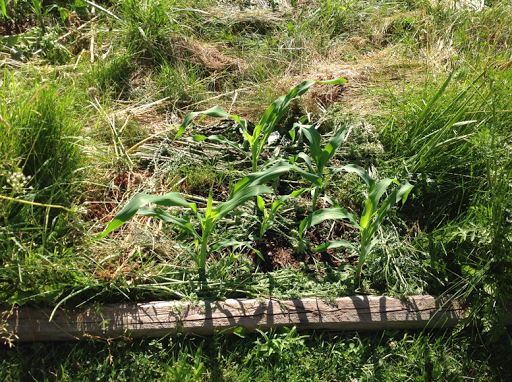 FIRST SLASH. In these images, you can see that we’ve begun our first whole slashmulching of the area, cutting down the big growth to make mulch in  place. So far, the benefit has been an immediate increase in the feeling of soil moisture retention. But it hasn’t been without drawbacks.
FIRST CHALLENGE. The first challenge we’ve run across is planting out beans into the slashmulch system. Since we slashmulched before the corn was tall enough for the beans, (knee high) I had trouble planting the beans into the mounds. In one case, I was forced to dig (with my finger) too close to a corn stalk and caused one plant some apparent stress by disturbing its root. This challenge could either be addressed by another top-dressing of compost at bean-planting time, or by designing to have a wider “ring” of finish mulch or soil around the corn plants for planting the beans into.
Some notes:
3-Sisters: Traditional 3-sisters gardens were grown across North America in a way that combined corn, beans and squash as ideal companion plants. Other plants like sunflowers, jerusalem artichokes, and amaranth were also frequently grown as 4th or 5th “sisters.” These systems are theorized to have been sustainable, no-till, and more productive in terms of calories than conventional organic European agriculture of the time. 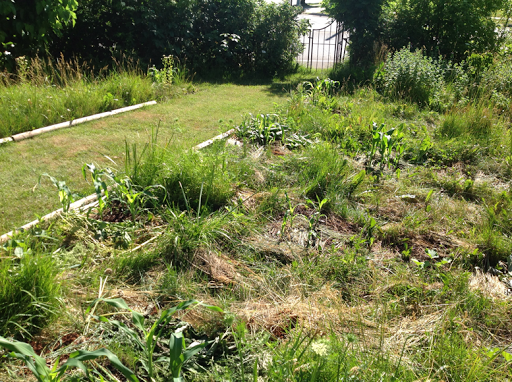 “Mounds.” One astute observer in our garden noted that our mounds were not very pronounced. This is because they were mostly made with only the soil dug from the cirlcle, or from mulch, which subsided in a few days. We also have moved towards a system where our “mounds” include a watering ring around them for planting the beans. This makes them easier to water, if necessary, and helps keep water in place in a rain. Native Americans reportedly used river-bottom lands for their plantings, using only the best soil for this intensive production system. These lands would have been naturally “irrigated” to provide good moisture all through the season, especially with a slash mulch layer to protect the soil. This is how they were able to reliably leave to go hunting for a few months, letting the crop grow without watering. However, it also left the plants more vulnerable to rotting and flooding, hence the mounds. On our sloped site, there’s almost no danger of rotting or flood and little reason to use pronounced mounds. It’s all a matter of using judgement and instinct.
Multi-use varieties. For homesteaders and small producers, the ideal is always to get the most bang for our buck. So rather than grow varieties that are specialists, such as growing a storage  dry bean and a separate fresh bean, we looked for varieties that could do both well. Luckly, this is also what Native Americans selected for, so many of the varieties most appropriate for 3-Sisters gardens are also multi-purpose crops.
Corn: We are using a small planting of our own corn seed, along with a multi-use variegated corn that can be eaten as sweet corn, used as popcorn or ground as corn flour. We’re also using Oaxacan green corn, a variety we’ve had good success with in 3-Sisters gardens in S.W. Michgan sites. Ideally, we hope to add these genetics to our own genetically diverse “landrace” corn variety adapated to our site. 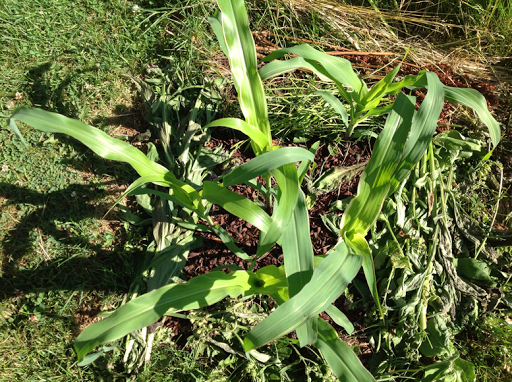 Beans: This is the sister we’ve had the least success with, so this year, we did our homework and hope to have the right varieties. Modern beans have been cultivated to put their energy into fruiting, instead of producing extra vine mass, so they have more compact plants. Great for monoculture, but bad for 3-sisters, where they have to compete with the corn stalks for light. The Native American varieties specifically grown in 3-sisters produced leaves on longer stems, inefficient for monoculture, but allowing the plants to reach out away from the corn to catch excess light. We picked two related varieties which reportedly have the right form and are also good multi-use veggies, Mayflower and Turkey Craw.
Squash: Again, we picked two Native American heirlooms, Delicatta and Seminole. Seminole is our favorite for 3-sisters, extremely vigorous and disease/pest resistant, very good eating. Delicatta is less well adapted to 3 sisters, but can be eaten under ripe as a summer squash and makes a good fall squash, whereas the Seminole is one of the best storage squash we’ve grown. 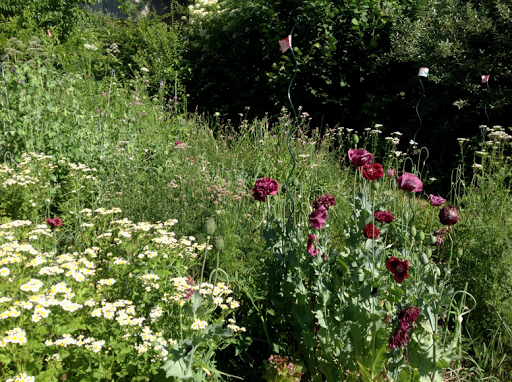 Styles: 3-Sisters plantings were adapted locally to suit the climate where they were grown. The style of planting in Michigan would have been very different than the style of planting in Texas or Montana. For the Eastern Woodland Region, including the Great Lakes area, we recommend what’s been called the Wampanoag style, named after Squanto and his tribe, who taught this style to the settlers. In more southerly locations, these were planted in circles at 3′-4′ spacings. In more northerly areas, this distance was increased to 5′. We’re using the 5′ spacings (approximately) this season, but have used 4′ and 5′ previously. We’ve found a possible advantage to the 5′ on our site. 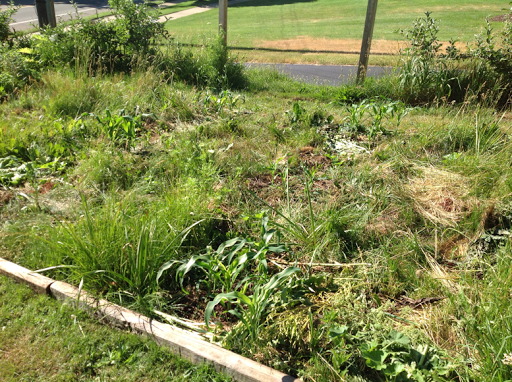 Timing: Some sources disagree on the planting timing. The traditional planting schedule I researched and have used sows corn and squash together at the same time, then beans later once it gets to knee-high. We’ve mistakenly planted beans to early and found the corn over-run with beans before it could reach productivity. Corn harvest was negatively impacted and the beans outgrew their “trellises.” So this makes perfect sense. Meanwhile, in one of the western styles of 3-Sisters, the squash is planted in with the corn in the same mounds, or nearby, so that they can better shade the corn and reduce watering work and waste. In that style, it makes sense to plant squash later, after the corn is grown out some and can better wwthstand the competition from the squash. But in the Wampanoag style, where the squash is placed a few feet away from the corn mounds, there is no threat of competition. Moreover, in our shadier, cloudier climate, the bigger danger is that starting squash too late is proven to dramatically reduce yields. So I strongly recommend planting squash at the same time as corn, and believe this to be the most historically accurate version for our region. 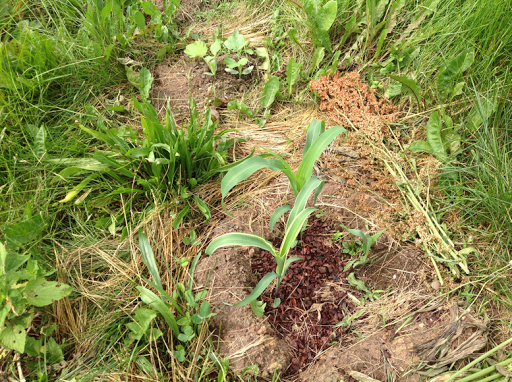 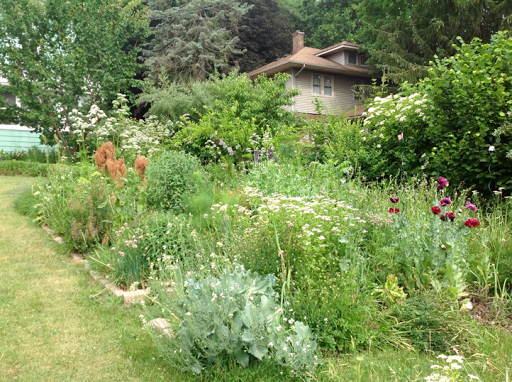 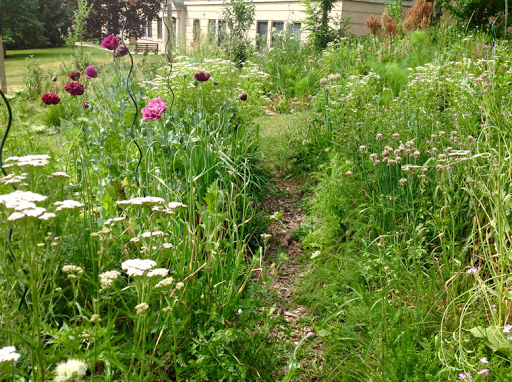 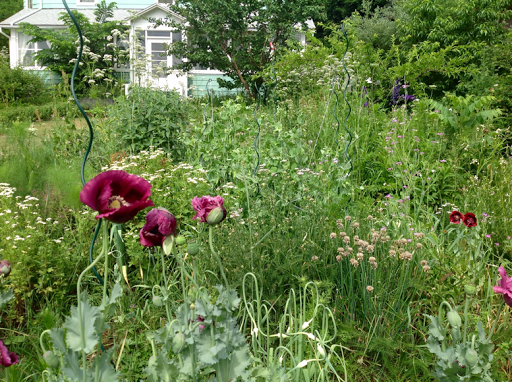 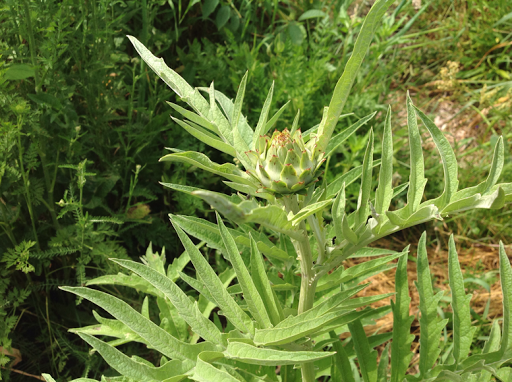