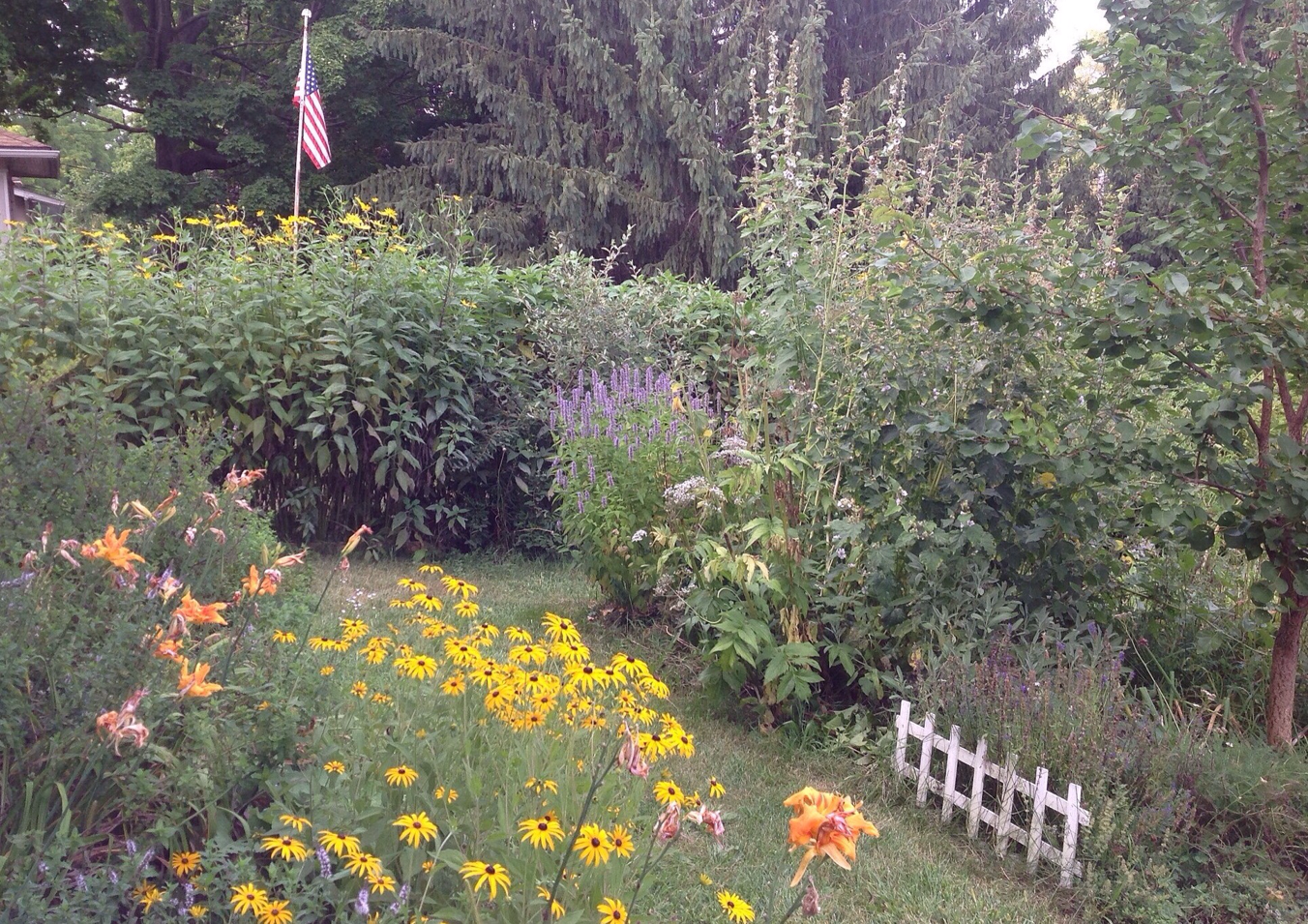 Want an amazing edible landscape plant with the beauty of wild sunflowers, that’s a hard worker in the garden, a high quality medicinal, a great vegetable and also an extremely productive “carb” crop?
Yes, yes, the sunchoke, or Jerusalem artichoke is all that and a bag of chips. Like literally, they make really, really great chips.
But that’s just the start of their culinary potential. While I’m personally not too fond of the cooked, unprocessed vegetable, the thinly sliced raw tuber (in small amounts) is a great crunchy stand-in for water chestnuts in salads, and when processed, it becomes nearly as versatile as the potato. We use it plentifully throughout the winter as one of our main “carbs,” as the base for soups, in breads and pancakes  as chips, pasta, gnocchi and latkes. The only caution is that the tuber contains inulin, which can cause flatulence, especially in those unused to digesting it. However, according to a few sources, and our own experience, the inulin can be broken down with long cooking, yielding an ingredient better-suited for a party. (Unless you’re planning a farty party.)
But for homesteaders, permaculturists and home gardeners who want to maximize the value of their space, the Jerusalem artichoke is even better, because it’s the perfect example of a hard-working multi-function crop. How do I love thee? Let me count the ways:
1. It’s a perennial “carb crop” extraordinaire. Since grain agriculture, the world’s main source of calories, is a major driver of climate change, soil loss, erosion, fossil fuel use and a host of other evils, perennial calorie crops are often considered the “holy grail” of sustainable agriculture. Yet, in the cold temperate climates the sunchoke calls home, there are few easy to grow perennial crops that are calorie-dense and can be the backbone of diet. Que the potato, though it is typically grown as an annual on rotation to avoid pests and diseases. But the Jerusalem artichoke, according to many sources has “roughly the same calories as potatoes,” yet has “few pests and diseases.” As such, they can (and are generally recommended to) be grown in the same place every year, as a perennial.
2. It’s often cited as one of (if not THE) highest-producing vegetable crop/acre we can grow in many cool and cold temperate climate areas, likely out-yielding potatoes in most regions. While this is frequently repeated by Permaculturists, agronomists, extension offices and other industry sources, some readers may be interested in digging a little deeper to see what data that backs this up. While output numbers are somewhat dependent on season and region, we do have some data to provide decent comparisons. For example, a study in the 1980s in Oregon found an average of nearly 64,000 lbs/acre of Jerusalem artichokes, without irrigation. The authors report that outcome was in keeping with research conducted by Washington University. Meanwhile, though Oregon is one of the highest yielding potato regions in the world, with modern high yields (actual yields, including some irrigation) at 53,000 lbs/acre. Purdue’s numbers are more conservative, citing University of Minnesota trials with an average production of 30,000 lbs/acre for sunchokes, while reporting statewide yields of 20,000 lbs/acre for potatoes. Although there is some disagreement across sources (with some placing average potato yields higher, and others placing maximum corn yields higher) the general consensus is there’s rough calorie equivalency between potatoes and corn  meaning that Jerusalem artichokes can produce more calories/acre than maize, the world’s most important calorie crop. While sugar beets and sugar cane outproduce corn and potatoes by calorie when converted into sugar, Jerusalem artichoke may compete or even out-perform these in terms of sugars and gross fermentables. 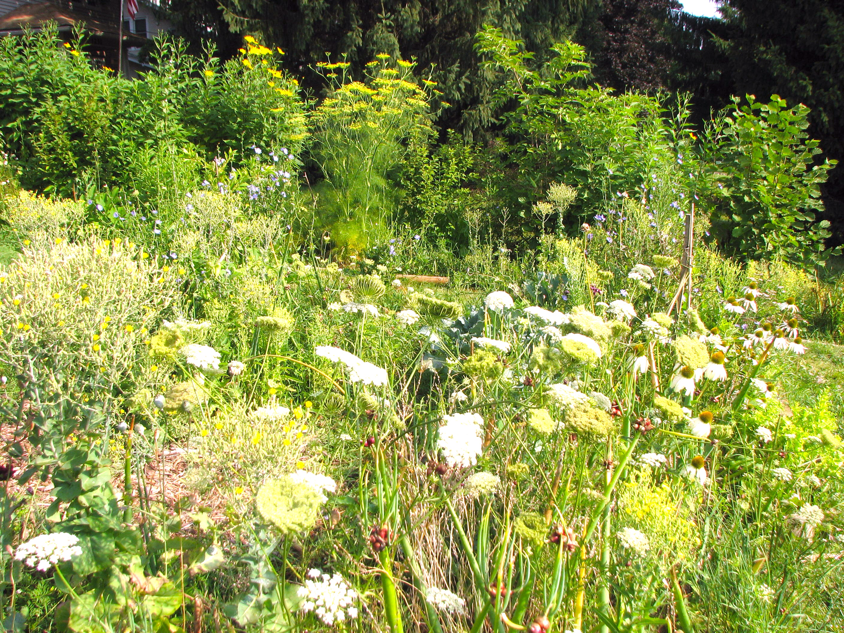 3. That’s just the tuber! Yield increases if you count the stalks, which are being studied as an animal feed, an ethanol source, and a compost crop. In Grow-BioIntensive gardening, it is both a “carbon crop” used to grow fertility and create a sustainable farm system, and a “special root crop” used to maximize the nutritional value of the garden. (Jeavons, How to Grow More Vegetables.)
4. We consider it an excellent mulch-maker plant. In Permaculture and forest gardening, mulch-maker plants are used to grow mulch right in the garden. Because Jerusalem artichoke is hardy, perennial and produces large amounts of mass, it is an excellent source of mulch in the garden.
5. It’s also a great “fortress plant.” These are plants that exclude other plants or potentially even pests. In the wild, I consistently see Jerusalem artichoke shading the ground and producing stands without other weeds. Often at the forest edge, it succeeds into grasses expands the forest. It does the same thing in our garden.
6. A beneficial attractor, wildlife plant, and companion plant. According to the Ladybird Johnson foundation, it has value to birds, pollinators and other wildlife. It attracts a wide variety of native pollinators, moths and bees, including specialist bees that rely upon sunflowers.
7. As a common plant of thickets and forest edge, it can fill in gaps in hedgerows and dead hedges while woody perennials get established, then tends to fade as these larger plants grow in. We’ve used this at Lillie House and a few of our related client and student sites.
8. It’s salt-tolerant.
9. It’s medicinal. It is a well-known source of inulin, used to help diabetics and others with problems related to insulin. As a prebiotic it may improve the composition of gut microflora. But while Jerusalem artichokes are a great source of inulin, most inulin available in the US is imported. Studies have documented Animal studies have found positive results on rats  pigs, and even fish. One study found that a Jerusalem artichoke diet improved the digestion of pigs and made their farts smell “sweeter.”
Considerations:
To Cut or Not to Cut?
Cut out cutting out the flowers of crop plants. The internet is filled with old farmer’s tales about cutting the flowers off Jerusalem artichokes to improve yields. As with most other crops, where it either completely false or economically disadvantageous, removing the flowers dramatically reduced yields in both the M.U. study and the Oregon State study. In fact, yields were more than halved by late-season removal of flowers.
“Invasive?”
While Jerusalem artichokes have few pest or disease issues, are salt-tolerant, drought-tolerant and may require less fertilization than other crops, the common warning is that they may become “weedy” or “aggressive” in some situations. Some even call them “invasive” even in ranges where they are native plants!
One may wonder how, with such an “invasive” plant growing natively across much of North America, anything else ever managed to grow here! Or why it’s so relatively uncommon when compared to so many plants that don’t bear the burden of the scarlet I.
Or perhaps it isn’t so surprising when considering that many sources, including the Illinois Wildflower.org noting that it more commonly persists on disturbed soils, with other plants succeeding in time without tilling.
We can learn the same thing from the dozens of reports online of gardeners failing pathetically in their attempts to pull, dig up, till or otherwise “weed” Jerusalem artichokes. This does NOT work. It only makes them happier. However, I have been monitoring several wild patches for years in my area, and can report that without the encouragement of “weeding” them, they show no signs of spreading. Some patches appear to go into decline after a few years without disturbance. The same has been true at our site, where a few of our prize patches have disappeared completely.
Other patches have been killed by animal pruning. Recall the huge negative impact of late-season removal of just the top 3rd of the plant? Imagine what happens when you remove the whole stalk earlier in the season. In fact, it is a little too easy to kill plants completely by poor timing of cutting. Mowing is a sure way to control their spread.
My advice is to plant them into naturalistic systems like forest gardens, where they will be controlled by the process of ecological succession, or plant them where they can be controlled by mowing. A linear food forest or edible hedgerow may be the perfect place for them. And for heaven’s sake, if you’re trying to get rid of them do not try to remove them by “weeding!”
Storage
The best place to store Jerusalem artichokes is in the ground. They tend to go rubbery in refrigeration or even cellaring. But patches can be dug throughout the winter where soils do not freeze, and maintain a good texture and flavor all winter.
Harvest
We leave most of our sunchokes until January, as I believe the sugars are highest by then. Tubers harvested later are considerably sweeter in my experience, than those harvested in the Fall.
Growing
Plant disease-free healthy tubers during the dormant season, Spring or Fall. The Oregon study found maximized yields at 17 inch spacings, but closer spacings did not significantly reduce yields, making them ideal for perennializing or inclusion in naturalized ecological growing systems like food forests or hedgerows. Yield was best in full sun, but chokes can grow and produce in fair shade, yielding moderately in fairly dense shade where few other vegetables would have produced.
On our site, they have persisted and produced well within the dripline of black walnuts, suggesting them as potential juglone-tolerant crops.
Sunchokes can be found producing even on depleted soils though they produce best with fertilization. 1 inch of compost or 4 inches of organic mulch is generally recommend for organic growers, along with minerals where soils may be depleted.
Chokes can typically survive and produce in the Great Lakes region with no irrigation, but some watering during drought may increase yields.

One thought on “The Sunchoke or Jerusalem Artichoke”