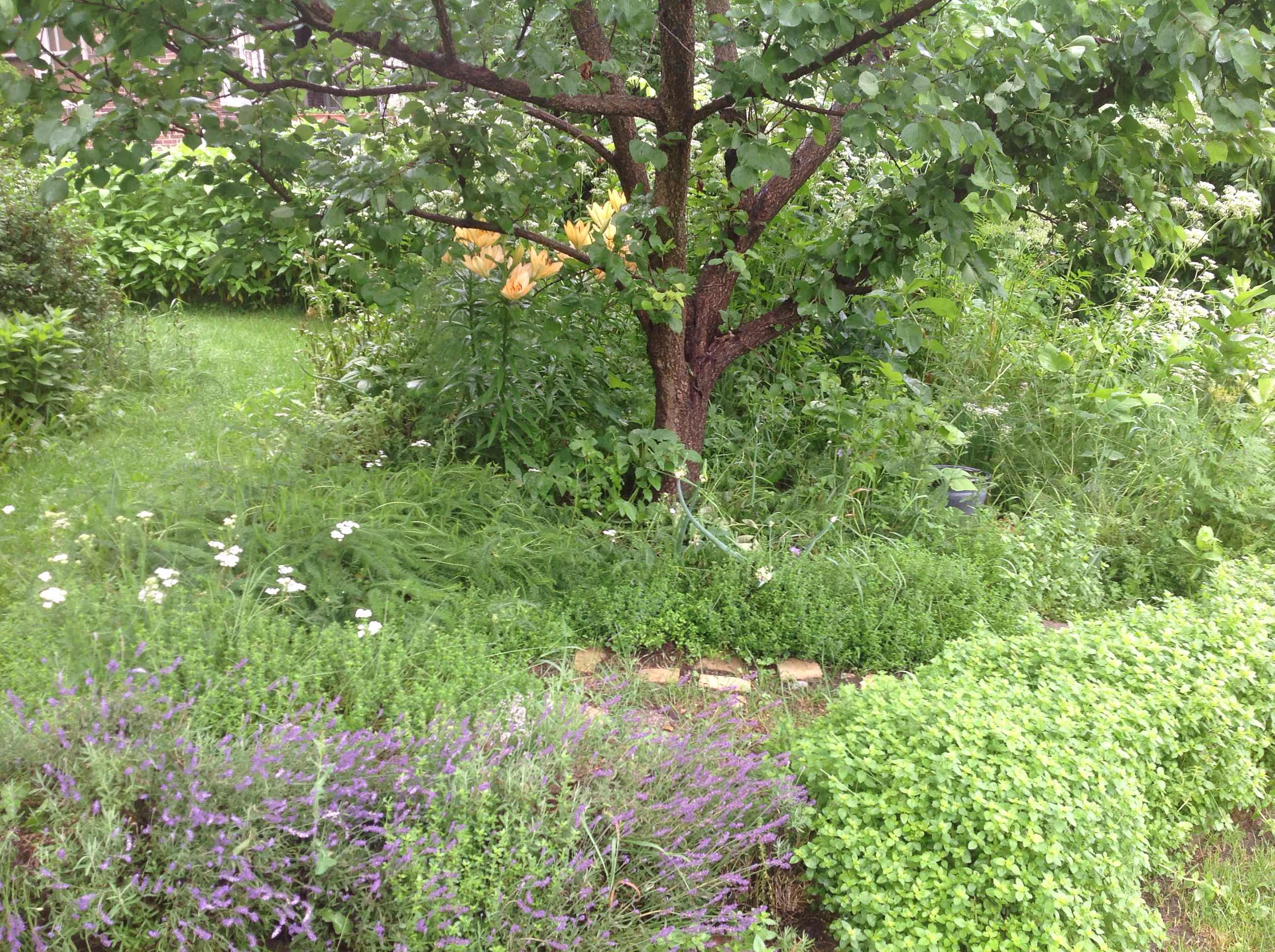 (A guild that really works on the home scale: productive, very low-maintenance, and a welcome sight in any neighborhood. An indication of our emphasis on practical home-scale Permaculture solutions for everybody.)

This is for you aspiring Permaculture activists and pros out there, or others looking to find right livelihood on the land: What REALLY inspires you these days? Where is the cutting edge? What is breaking new ground?
What is “next gen” Permaculture – what is the next stage of succession that grows the abundance and diversity of social and ecological regeneration?
This is something Kim and I have been increasingly talking about with our students and clients for the last decade or so, and now I’d like to open up this discussion to a broader circle. This won’t be the same in every market and social network, but in many, Permaculture 1.0 has likely reached the peak of its succession arch in this cycle. (Yes, Permaculture has already been through a couple growth and “correction” cycles.) So if we’re not thinking about new niches, adding new layers of diversity, succeeding into new edges, finding new markets, organizing new communities, exploring new paradigms – then we’re not really in the game.
I don’t mean to be harsh, I mean to be helpful. I mean this to be a challenge. I want all of our Permaculture careers to be rewarding, impactful, and successful, and for that to happen I think there are two things we need to understand.
First is that I’m seeing people starting very 101 level Permaculture or “demonstration” projects, often with no project or physical site design (so not actually even Permaculture) with a couple of hugelkultures and an out-dated apple guild from 1982 and expecting folks to line up like it’s the krameterhof. Meanwhile, I’ve watched a dozen similar projects start and stall in their neighborhood in the last few years. When it comes to that basic model with a focus on workshops and optimism, we’ve probably reached market saturation. The same saturation is apparent in most market for SPIN farms, “yuppie chow” factories, hog farms and most other meat, dairy, CSAs, grapes, standard vegetable farms, you pick orchards, most orchards in general, wholesale greenhouses, season-extension hoophouse operations, pumpkin patches, heirloom and native seed operations, annual veggie nursery operations, and Christmas tree farms. Also: Local-level non-profits that create community gardens, those that promote the “good food movement,” and the good food movement in general. In my market I see experienced and competent entrepreneurs in all of these areas struggling.
A lot of this stuff is all about market timing and being in at the right time. And you wouldn’t buy a Krispy Cream franchise with the stock plummeting due to over-saturation and 3 other stores struggling on the same block, unless you had a really good reason to think yours was going to be successful. One good sign that the market has crested is when Universities start promoting a model, extensions start offering grants for it, or people are getting rich off online classes teaching people how to do it. It doesn’t take Warren Buffet to see that everybody’s going to be in at once and the result is going to be the same as when Walmart opens 4 stores in the same small town knowing only 1 will survive (but they’ll also drive every local grocery out of business in the process.)
Meanwhile, I know of next generation “Unfarming” operations in many of these fields utterly THRIVING. I don’t want to call them out, but while I’m watching apple orchards fail or basically continue as expensive hobbies for their owners, I know one small orchard in a hard-to-reach location that’s grown to host 6 or 7 different separate stacked enterprises, and each appears to be making its owner a very decent living. A couple of those businesses provide full-time jobs for multiple adults, along with part-time labor. They’re doing really visionary next gen stuff and NOBODY is even competing with them. I believe S.W. Michigan alone could support a half dozen such business complexes – at least –  and we don’t even have one. Yet, this year, I’ll probably see a dozen people start conceptually similar businesses thinking that mediocrity is enough, and they’ll either have to take their mediocrity to a national market with corporate scale and investors, or they’re going to be out of business in 3 years.
Sorry, I’m just telling like I see it.
The average farmer across virtually every sector hasn’t made a profit in about half a decade. From the research I’ve seen, in almost every market that’s been evaluated, farmers market consumption has been declining. Even while some individual markets have been growing, this has usually been at the expense of smaller markets as rapid consolidation has occurred. Growth in vendors has come at the expense of the farmers, who’ve had to accept a smaller market share.

We’ve all got to challenge ourselves to be better than average, or to cultivate a different product or a different market.

But that does NOT mean emulating the unhealthy corporate/Amway BS grindstone, hustle, hard-work, positive-thinking, believe-it-to-achieve it, spread-sheet-it-like-a-dead-horse mindset and culture. And yes, some “profitable farming” and Permaculture schemes are selling exactly that, and even using the same old pyramid scam language verbatim! I can’t imagine any kind of regenerative ANYTHING coming out of that kind of mind or model.
A second thing to understand is that in this stage of business succession, things can go two ways: it could start a new round of expansion and prestige, or it could collapse. It could continue to grow in a healthy way by increasing the number of interactions and diversity in the system, or we can start to get “weeds,” which are difficult to utilize in a regenerative way, and will actually reduce the benefit, diversity and abundance of the system, or reduce the resilience of the individuals in the system. They’ll shrink the market for everybody.
Yesterday, I was consulting with a client working for a nursery business, and we discussed this phenomenon in that sector. Historically, greenhouse nurseries spread around my city, Kalamazoo, until we had more than any other region in the world, and we were at capacity. These days most of these sit empty or under-utilized, because after the market reached saturation for that business model, weeds started to arise that could use these failing businesses as a resource. Middle-men stepped in to reduce marketing and distribution costs, typically at the expense of increased resource consumption. Short-cut suppliers stepped in to provide cheaper services at 1,000 points along the production line, again, usually at the expense of sustainability and the land. This created a fast race the the bottom, until the bar could be lowered no more, then consolidation and centralization began.
Already we’re seeing similar weedy forces in Permaculture and homesteading. To me, these include efforts to consolidate, “professionalize,” or market corporate-style peer-to-peer services that look a lot like pyramid schemes, or that aim at taking value out of small businesses and promoting the same “race to the bottom.” Plastic farming, systems that hide or rename tilling, certification systems for marketing, online “profitable farming” courses that push unsustainable practices to cut costs… there are a lot of potential weeds to watch out for. Once these weeds get started in a sector, it gets much harder for any of us to interact regeneratively with that sector without racing to the bottom. Worse, many of these actually increase consumption of fossil fuels, depetion of water, carbon pollution, and reliance on the corporate economy.

But look around the world? What percentage of people are living a lifestyle that is life-enhancing and regnerative personally, as well as to the ecosystem, social system and biosphere? Like, .2%? Max? The potential market for growth in Permaculture, homesteading and income streams based on sustainable ecosystem services is IMMENSE. Yet everyone’s targeting the same few dozen poor hippies in their region who are already living pretty regeneratively, hoping to get more blood out of them there turnips….

So what really has been inspiring ME these days – what I think is TRULY next-gen Permaculture – isn’t a soul-sucking race to “the top,” it’s people just daring to be more fully, completely, eccentrically themselves. That thriving orchard I mentioned earlier, that’s what they’re doing, something unique, passionate, and more than a little eccentric. It’s people reaching outward, intead of inward to “the community” looking to build rich, diverse social ecologies out of their lives by networking and meeting the needs of the people around them. It’s people building interesting, adventurous lives and communities for themselves. I’m inspired by people mining new markets, by trying to build richer connections between nature and the people in their communities while cutting out corporate middlemen. These are people who are repairing the broken social fabric of their friend and family groups and natural organic communities. These new inspiring revolutionaries follow their passions, follow adventure and real connection, on a path to become unique and interesting persons. In the process, they build broad and diverse little social villages – then they teach them to be inter-reliant and vibrant. Instead of huddling together online with 3 dozen regen farmers as your social group all selling the same prodouce, meat and trees, we need to reach outward. What would a folk village look like if everyone was a heart-surgeon and nobody wanted to do any other work? A whole lot of heart-ache, that’s what. Everyone needs Permaculture. Everyone deserves Permaculture.
Let us be literally fruitful and multiply. And if you’re not discussing next-gen Permaculture with your mentor and support system, AND concrete tools to bring it into the world, then you might not be in the right game.