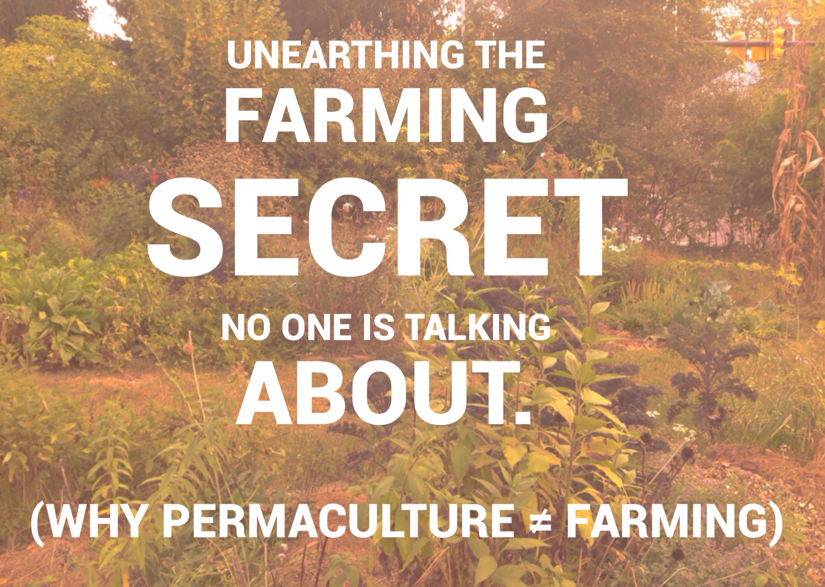 “The opposite of a bad idea is rarely a good idea, it’s usually just another bad idea.”
In America’s frantic and polarized culture, this axiom is one of my favorite thinking tools. It’s an oldie-but-goodie that’s being re-popularized by John Michael Greer.
Lately, I’ve been sharing a lot of negative-sounding research and perspectives on the current “profitable farming” craze, but it’s NOT that I want to discourage people.
I want people to succeed gloriously in creating beautiful, rich lives with greater connection to the land – living WITH the land, not OFF it like some beast of burden. And I think that goal is completely attainable. 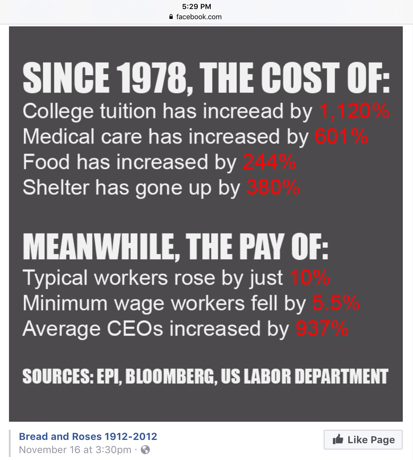 (And here are some reasons smart folks are turning to the land for a livelihood)
Folks feeling trapped in the out of control dumpster fire of modern American worklife often want to head straight into hardcore homesteading or farming, get some acreage, a managerie of animals, and simultaneously start market farming. I see this all the time. Several popular “farming business models” even promote themselves as ways to learn about farming while making a living do it. (That should be a warning sign in itself.)
Out of the fire and into the fryer. This is NEVER a good idea. Some may survive the heat, but that doesn’t mean it was a good idea. Why not just get out of the fire?
If you’ve looked into farming at all, you’ve heard the stories and advice of those Regenerative Ag gurus who bought acreage, took on massive debt, invested in thousands of trees with a 90% attrition rate, started experimenting on livestock, lived in hovels with dirt floors and tarp roofs for 20 years until farm insurance speculators drove up their land prices enough that Trulia told them they were suddenly millionaires. Their advice? Just do what they did! Easy! Or perhaps you’re more inspired by the intrepid enrepreneur veg-farm start-ups that managed to pull “$150k!!!” (fine print: that’s gross, net is minimum wage) after staving off bankruptcy for 3 years by charging super-premium prices in upscale markets with no mortgages and lots of free money and labor. They SURVIVED! So now they cash-flow big money each year selling “profitable farming” workshops!
But just because they survived wandering blindfolded through the field of pit-traps they set for themselves, doesn’t mean blindfolds and pit-traps are good investments.
Everyone knows most new businesses fail, and the numbers for farm businesses are absolutely the worst of the worst.
We look to the famous farmers and Permie celebs on magazine covers that “survived” for advice, when – because the biggest problem is high attrition rates for new farms – when we SHOULD be looking at the ones that failed. This is called survivorship bias. Another great thought tool every farm entrepreneur should be familar with:. https://youarenotsosmart.com/2013/05/23/survivorship-bias/
Finally, another great thought tool from the world of poker: if you’re at the table and you don’t know who the mark is, you’re the mark…. (the one who’s going to lose.)
So here’s the thing everyone’s keeping a secret: Farming is the most direct interaction with the market you can have. Sorry, but it always has been, always will be. It’s what you’ll read in farming briefs from the 1910s or 1890s, all the way back to medieval farming manuals! Or watch the BBC “Historic Farm” series for the cliff-notes version. Permaculture creator Bill Mollison talked about this stuff ALL THE TIME. It’s all about supply/demand, market forces and buying low, selling high. 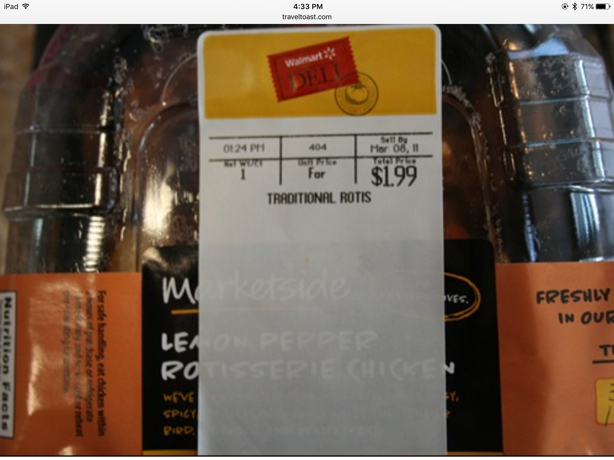 (That’s a whole chicken, cleaned, frozen, packed, shipped, prepped, cooked, packaged, and kept heated for $2. You gonna be profitable competing with that in your backyard?)
Right now, land prices are super high. Cattle prices are very high. Hog prices are high. Prices on heirloom poultry are super stupid freaking high. But market prices on beef, milk, pork, eggs and fryers are kept ridiculously, artificially stupid low (see graph for example.) You can literally buy a whole chicken, already cooked and prepared at Walmart for $2. THAT’S LIKE A DOLLAR CHICKEN!!!!!!!!!!!!!! Nursery stock is stupid cheap, but upscale vendors are reselling literally the same stock for a 4000% mark-up to would-be farmers financing with Ag loans. Vegetable prices are just plain silly and meanwhile there’s a growing glut of vegetable farmers competing for a customer base that research indicates is currently declining. Local farmers markets are consolidating in most markets into super-large events with tons of competition. New farmers think they can undercut the competition, but in the studies I’ve seen, the veg farmers making money are ones able to charge 4-10 TIMES above market rates.

(Dead on economic analysis from Revolutionpig.com. A hog has 1/4 the buying power it had in 1960)

Now I cannot fathom sustaining chickens that cost HALF as much as a 16 oz bottle of water forever into the future…. But what IS highly profitable right now is “profitable farming” classes, especially online ones. I call this “new digital farming,” and it ain’t all bad. (Others have started calling it “Youtube Farming.”) Most farmers will need some way to decouple their income from the productivity of their land if they don’t want to end up exploiting their land. But given how silly the promises have become (“learn to be a millionaire off an acre!” is a literal quote from one ad going around) and expensive they’ve become ($1,500 – $4000!) I think even “profitable farming” classes have reached their peak. Given the spending power of your average farmer, I’d say this market looks worse than blood from turnips.
And I don’t know any of those gurus who will tell you those most important “secrets” (i.e. 101 level farming basics) I just told you in that paragraph above. Why would they let the air out of their own bubble? In fact, some will be mad that I did. And for FREE even! But if we’re not careful, when that profitable farming bubble pops, it’s going to blow up a lot of really valuable Permaculture, local food, and sustainability initiatives with it.
also: https://www.npr.org/sections/thesalt/2017/12/14/570889309/the-usda-rolled-back-protections-for-small-farmers-now-theyre-suing?utm_campaign=storyshare&utm_source=facebook.com&utm_medium=social
Anyway, none of this means you can’t actually farm profitably or live with the land. But it does mean you have to be clever. How are you planning to beat the curve? How will your designs support that plan?
If Ag briefs show you can make $30k off a 1,000 hog herd if you can demand top prices, and you’re planning on a dozen hogs being your main Ag product for the first 10 years, you’re going to end up scrambling to pay off your $100k of “regenerative ag” infrastructure. Look at studies on time requirements for various farm tasks: unless you got some kind of magic system, those hogs are just going to cost you more time to care for than they’ll save you in “work,” no matter what your guru says….

Careful Permaculture design can help you make war on costs and meet your income goals, but only if you have clear goals and a detailed business plan to begin with. Many new Permie business plans only ever get as far as: “Buy farm, become Sepp Holzer, make BANK on farm tours and classes.”

But more importantly, despite what some of the famous gurus are selling, you don’t have to farm to “do Permaculture.” Although you literally can’t find* this radical secret knowledge on the Permies forum, Permaculture has nothing to do with farming.* It has to do with designing your landscape and life to better meet your needs.
So why do you really want to homestead or farm? Is it:
To have a simpler but richer lifestyle?
To reconnect with nature and natural rhythms?
Because you love being around and caring for animals?
To find right livelihood?
To make a living OFF the land by exploiting the earth, animals and human laborers?
Or would you rather live WITH the land, in cooperation with your ecosystem and community?
Because you want to raise your family around these things?
Because you want to take control of your family’s food and health?
Because you want your children to be reslient, healthy and know how to grow their own food?
Because you want to fight ecological collapse and climate change while helping your community?
Because you want to prepare for the uncertain and dangerous future we appear to be creating for ourselves?
Because you want to save your family farmstead?
Because you want to help feed your community?
Because you want to learn about farming?
Because you have some notions about “self sufficiency?”
Because you want to live some “farming lifestyle” that is probably just a total myth?
You can design your life to accumulate all these things, and have a higher positive social, economic and ecological impact, without farming. In fact, it’s highly likely farming would only get in your way and hold you back. Ask: Is it possible that our preconceived notions (or the notions sold to us by digital farmers and University Extension services) about farming and homesteading are just a blindfold?
What do I really want? How can I design my life to accumulate what I really want? Answering these questions and daring to take off the blindfold, that is the “REAL” Permaculture.
Thank you for reading! And if you’ve go stories on how you’re designing your own livelihood with the land, please let me know!

If this sort of honest well-informed perspective on the economic dynamics of making a regenerative living resonates with you, consider joining our upcoming fund-raiser Permaculture Design Certificate Course.

The economics of SPIN Permaculture

*Lengthy Editorial Note: Since I’ve been challenged to support this claim marked above, here are a few pieces of evidence.

For transparency, the original article read “you literally can’t share,” which I have changed to “you literally can’t find.” While the original statement is factually true, and I was literally not allowed to say the phrase “farming isn’t Permaculture” on the Permies forum, I cannot substantiate that claim without taking the time to screenshot my correspondence with Paul and get permission from him to share them, which I feel would be ethically required given our private correspondence. So, I changed one word to create a nearly identical claim that can easily be substantiated.

* 1. The content in this article is based on Permaculture asset class analysis, which Bill Mollison and Rosemarry Marrow both called “the first topic of Permaculture,” and they often spoke and wrote at great length about it. It is simply a verifiable fact that there is no content on this important Permaculture subject on the Permies forum. I was told by Paul Wheaton that posting such content was not allowed at the Permies forum. Paul has made very many posts, podcasts and videos explaning this editorial position clearly. It is his right to develop and promote his own type of Permaculture, as it is ours at Lillie House to develop our own, and place “the first topic of Permaculture” back at the forefront. But the best evidence to support the claim is that there is a massive amount of content on the Permies forum, but not a single post containing any of the terms of asset class analysis, or examples of applying it.

There you have it, that you can’t find this content at the Permies forum.

Again, this is not saying that Paul Wheaton is a bad human. This is not an attack on him. I actually think Paul developing his own approach and testing it makes Permaculture stronger. It’s a form of Polyculture. But it’s also fair for us to point out the fact that this Mollisonian content is not available at Permies, and that it’s a kind of thinking and design we’ve specialized in for over a decade.

6 thoughts on “I Wish I Understood this Before I Started Farming! (Why Permaculture ≠ Farming)”